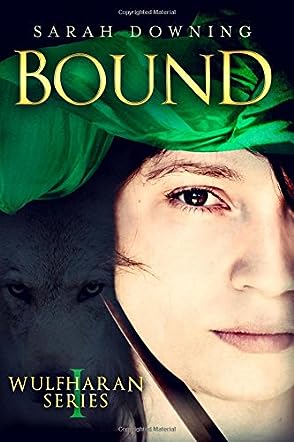 Her job takes her all over the country, working in some beautiful locations, many of which have inspired places in her books.

Sarah is also a member of a Traditional English Martial Arts group that train in a number of armed and unarmed combat techniques that include sword, sword and dagger, shin kicking and Cornish wrestling.

She has also been lucky enough to do voluntary work at the UK Wolf Conservation Trust in Reading.

Bound by Sarah Downing is a fantasy story that begins on an ocean voyage. Coiran is a slave that is given as a sacrifice to save the ship and its crew. Coiran is lucky to survive but finds herself in the care of a former prince, Elam. Elam takes her into his home but is uncomfortable because he knows so little about this enigma. The story then changes into a murder investigation when the king dies unexpectedly in a hunting accident and Elam is named heir to the throne. Some begin to suspect Coiran, and Elam must decide who to trust. Coiran must also decide if Elam is really her savior or just another man who is sent to hurt her.

There was a lot to like about this story. Readers will appreciate the rich world and civilization that this fantasy story represents. The world was full of magic and exciting fantasy characters like slaves, sailors, royalty, priests, and wizards, all who consider honor, oaths, and their bonds more valuable than the riches of the kingdom. There is also a lot of action in this story in the form of murder, poison, and the fight for survival. There is a cool rendition of a fantasy judicial system that readers will enjoy. I also liked the relationship between Coiran and Elam and readers will appreciate the way the two interact with each other. This was a pretty believable relationship.