Bradley and the Magic Carpet 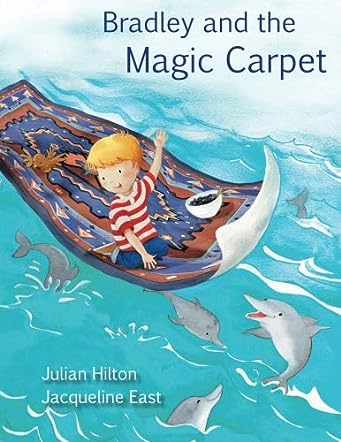 Julian Hilton is a writer and musician who lives beside the seaside in the magical county of Devon, England.

Born in Liverpool in 1969, England, home of the Beatles (the same week Get Back was in the charts), Julian always fancied being a Beatle, but could not sing like Paul McCartney or play the guitar like John Lennon. Still, much like the fab four, he would much like to contribute to the world in some small way. Using a vivid imagination for the impossible, it seems much more likely to tell tall tales of adventures you can have while still getting back in time for your tea...(or 'dinner' as it's known elsewhere outside the Northwest of England).

Bradley and the Dinosaur has been in print for almost two years, and already has become a hit with young boys and girls alike who agree that dinosaurs are just fabulous.

Now followed by Bradley and the Magic Carpet, more stories are due to follow soon...

Bradley and the Magic Carpet, written by Julian Hilton and illustrated by Jacqueline East, is an adorable children’s story about a young boy named Bradley. Picking blackberries so his father could make blackberry pie, Bradley ate some of the fruit as they picked. Then he gathered a little bowl of the sweet berries and dozed off on a Persian rug. Bradley is whisked away on a journey that takes him to faraway places he could only dream of when his carpet begins to fray. What is little Bradley to do? With blackberries still in the bowl in his hand, how will he get home in time for his father to use them in the pie?