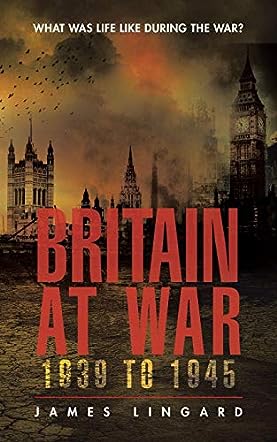 James Lingard - educated at Dulwich College and University College London -became a leading City of London solicitor who specialised in banking law and insolvency.
A former Council Member of the Association of Business Recovery
Professionals and of the European Association of Insolvency Practitioners, he became a Judicial Chairman of the Insolvency Practitioners Tribunal.
He was the founding President of the Insolvency Lawyers Association and also became Chairman of the Joint Insolvency Examination Board and of the Banking Law and the Insolvency Law Sub Committees of the City of London Law Society.
He is the original author of Lingard’s Bank Security Documents (LexisNexis)
now in its 5th edition and of a number of other legal books.

Britain at War 1939 to 1945: What Was Life Like During the War? by James Lingard is a chronicle of the second World War through the eyes of a British (universal) citizen of the period 1939 to 45. It begins with the discernible preparations for attack, like digging trenches and underground shelters, or adapting to blackout regimes. A good picture of the difficult times emerges from this with the rationing of essentials, unheated rooms or frequent blackouts becoming commonplace. The Thames being visible at night giving away the adjoining areas to bombers during raids, the author mentions, led to greater share of bombs being received by the areas around the river. This book also gives a good account of the Allies’ campaigns in all parts of the world.

The frequent exhortations by great leaders like Winston Churchill keeping morale high, the national spirit remaining alive at all times, can seen in these pages. Rather than from a professional angle, James has done a wonderful job of reflecting the nature and depth of many a military campaign from the viewpoint of the survivors. I found this a beautiful representation of the fears the public had and the remarkable resilience they showed to the recurring difficulties of living. I can’t help but relish the providential escape the author and his clan had when, on hearing an air raid siren, they happened to arrive late at the shelter, only to find the very shelter destroyed by bombs!