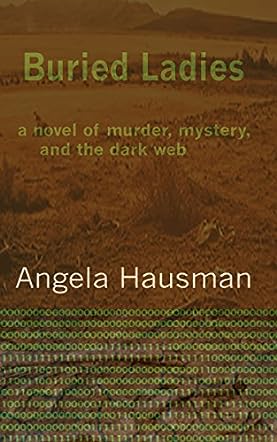 The Buried Ladies series (Buried Ladies, Scars of the Past, and 1 more) are the first fiction written by Angela Hausman since creating a highly acclaimed (by fellow 6th graders, teachers, and family) science fiction series as a teen.

Dr. Angela Hausman was born in McKeesport, Pennsylvania and later received undergraduate and MBA degrees from the University of Pittsburgh before completing a Marketing PhD at the University of South Florida. Over her career, she lived in many places and met diverse people, which she filed away to create her plots and characters.

Angela currently lives in Washington, DC, where she works asa marketing consultant and teaches marketing at George Washington and University of Maryland. She writes in her home office, where various dogs and cats block her in until she's finished the day's writing quota.

Buried Ladies: A Novel of Murder, Mystery, and the Dark Web by Angela Hausman is a murder mystery. Joan is convinced that her best friend, Estella, is dead so she calls 911 to report it. The trouble is, there is no body at this stage. But there is pure evil and Joan has just opened a whole can of worms, a hunt for a serial killer and for another, more evil man. Arturo Vasquez did love Estelle once, but now he is holding her hostage in an operation that proves dangerous for Estelle’s husband and Joan when they attempt a rescue. Perhaps Hector Mateo is the evilest, the head of the Gulf Cartel; or is it Detective Morales, a man focused entirely on what he believes is the truth, ignoring evidence to the contrary. As the trail of bodies leads them on a manhunt, it soon becomes clear that Estelle may well be alive, but where is she? And who is the real serial killer?

Buried Ladies: A Novel of Murder, Mystery, and the Dark Web by Angela Hausman is not your average crime story. It starts fast and continues a furious path, romping through the story, twisting and turning through dark paths to a conclusion you won’t see coming. There is plenty going on here, perhaps too much as there are quite a few antagonists to keep track of. However, Ms. Hausman has done an excellent job of taking several stories and weaving them together in a seamless plot with an explosive ending. The character development was great; it left me in no doubt as to who I was reading about and it gave a good background to a story that is both complex and intriguing. I would recommend this to anyone who wants a great thriller to sink their teeth into.