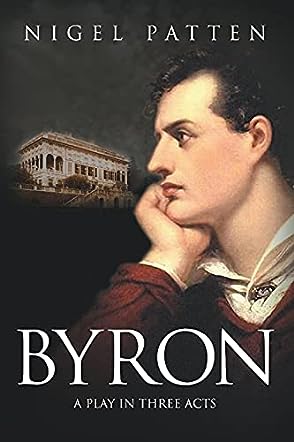 Byron: A Play in Three Acts by Nigel Patten is really a novel dressed up as a play. The long speeches, particularly by George Gordon, Lord Byron, British Romantic poet (1788-1824), would be almost impossible to follow by a theater audience, though they make for fascinating reading. Patten portrays the poet’s last three days in Italy before moving on to become a supporter of Greece’s war of independence against the Turks. Patten captures Byron’s life in dialogue among the principal figures engaged with him at the time. These are Edward Trelawny, Teresa Giuccioli (Byron’s mistress) Lady Blessington (a patron of the arts), Mary Shelley, in mourning for the death of her husband Percy Bysshe Shelley, critic Leigh Hunt, and a few minor characters. Along with the brilliant dialogue, Mr. Patten gives us stage directions that include precise descriptions of the sets, costumes, and views of the Mediterranean Sea.

The conversations among these giants of the early 19th century are fascinating. More than learning facts about Byron’s life, we get a powerful and engaging dose of his personality and of his views of his own self, his poetry, his friends and enemies, his opinions on diverse philosophical issues, of women in general and in particular (especially of his ex-wife, Lady Byron), and of the slings and arrows of being a poet and gentleman of note. We learn of his diet, dealing with his club foot, his critics, his travels, his childhood, his loves and debaucheries, and his concerns about Greek independence. I can’t imagine how difficult it must have been for Mr. Patten to capture the expansiveness of Byron’s character, but he pulls it off magnificently. A literature major in grad school, I was captivated, recalling the great poems and now hearing of Byron, the man, and of the milieu of his final days. As a man, Byron was a centerpiece of European culture, arts, and letters, and Patten’s work, Byron: A Play in Three Acts, is a must-read for anyone interested in literature. Thank you, Nigel Patten!