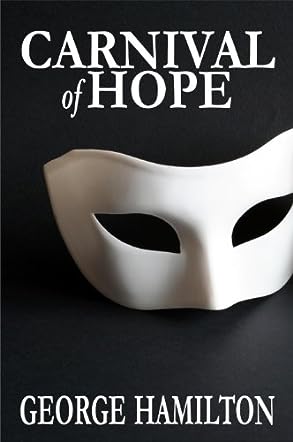 George Hamilton studied at the University of East London, majoring in development economics. He likes to know what’s going on around the world, to delve into the customs and practices of different cultures. His first novel, Secrets From The Dust, is enriched with aspects of the Australian Koori (Aboriginal) culture, and in Carnival of Hope, he turns his sights on the Nordestinos of North-Eastern Brazil. He currently lives in London, England.

In the northeastern corner of Brazil the local population, most of African, Native, and European descent, live in poverty in little shacks and with little to eat. Tomas has learned to read and write and teaches those between teenage years and their thirties how to do the same so they can go down South in Brazil to the big cities and look for work that pays. Where they are now, they work on the local sugarcane plantation or at jobs that pay barely enough for food. The local government of Tomas's village watches the local people who are referred to as the Nordestinos. If any of the Nordestinos can read or write then they are thought to be communists intent upon making everybody poor. Tomas watches the mayor, Giomar, loading his jeep up with food from the plantation. The mayor and his cronies are not poor. Tomas's sweetheart, Thereza, makes a feathered cape to dance in the upcoming carnival where the winners are taken in a bus heading south to Brazil's cities and a better life. But what does this better life really entail?

"Carnival of Hope" is a story that comments on small town Brazilian government officials and those in power who live well while the average Nordestinos live in poverty and often come close to starvation, raiding the local dump for whatever they can find. Tomas and Thereza and their families and neighbors are well-created and believable although the well-fed reader will feel sadness at the life they live. That Dona Menzies has to tell Tomas that he cannot teach in her shack anymore for fear of government reprisal is realistic and accurately portrays parts of countries beyond the reach of television cameras. The plot line flows believably to the story's somewhat sad but realistic ending. "Carnival of Hope" is a story that should be on reading lists everywhere as a wake-up call to conditions that really exist in our modern world. Not all carnivals lead to good things for everyone and "Carnival of Hope" shows it as it is.