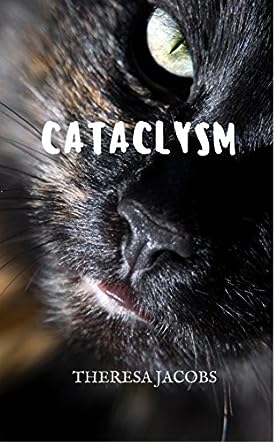 Theresa Jacobs is a mistress of the horror genre as Cataclysm illustrates with a clarity that is not for the faint-hearted, but fans of horror, crime, and fantasy are guaranteed to love. In North Falls, a small town in the Canadian Rockies, a retired librarian lets in her cat and Missy is the only witness to her murder. Chief Salinger is utterly baffled. Who could have killed Judith Barnes, why, and HOW, given the state of her body? Sally McKinney, a journalist, is tasked with announcing night curfews. The baffled coroner ships the corpse to Vancouver. Another woman and her step-daughter die… Sally picks up the woman who found Judith’s body, but who can believe her incoherent tale of red eyes in the darkness? The army, alerted by the Vancouver authorities, steps in, but will they help to save North Falls or destroy it to keep a secret from the world?

Judith, a retired librarian, Lucy, Judith’s traumatised friend, dedicated Chief Salinger, his rebellious son, Bobby, and young Constable Duncan, Sally, a newshound on the lookout for her big break, high school sweethearts, Doug and Katlyn, Jennifer and resentful step-mother Alice, are all vividly portrayed and bring the rural town of North Falls to life. The army seems set on sending it to oblivion. Why? What is the secret they are so desperate to hide, and will the murderer, or murderers, be caught? Action and shocks aren’t over until the last sentence is read. Cataclysm by Theresa Jacobs is clever, fast-paced, and enthralling. I loved it and recommend it without reservation.