Gods In The Ruins

Gods In The Ruins Legends of the Circle The Band of Moonlit Waters 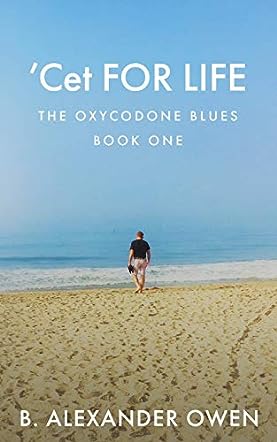 Cet For Life – Book One: The Oxycodone Blues by B. Alexander Owen is a deep dive into the mind and world of an opiate abuser. Now in his fifties, Steve (or Stiv as he prefers to be called) is a product of the Seventies and Eighties and grew up on a diet of both illicit and licit drugs plus, of course, the obligatory alcohol. Despite giving up the booze some three years ago, Stiv is hopelessly addicted to prescription medications, most notably the pain-killer Oxycodone. He has been taking the drug for supposed back pain for some fourteen years now and his one attempt at weaning himself off the drugs a while back had gone horribly wrong for him. Despite having a loving and caring wife, whom he adores, Stiv’s life revolves around his monthly doctor’s visits and his filling of the prescription for his beloved “blue bullets”. Having just lost yet another job (this time for fighting), Stiv needs his calming, relaxing, and soothing little friends more than ever. When a vigilant pharmacist suddenly cuts off Stiv’s supply, all hell breaks loose in his psyche and his mind. What is he going to do now? How can he possibly survive without his beloved Oxycodone? What follows is a thorough self-examination of who Stiv is and what he really wants from this life that seems to be rapidly descending into his own personal hell.

Cet For Life is certainly a no-holds-barred examination of personal addiction and the scourge of opiate abuse that has swept the western world in recent years. Author B. Alexander Owen pulls no punches as he describes in technicolor clarity the hell that is opiate addiction withdrawal. What I found particularly endearing about this character and the story in general was Stiv’s ability to see, to understand, and to act on the ideals of personal responsibility – that it wasn’t anyone else’s fault he was in this position except his own. I particularly enjoyed the counterbalance of Stiv’s wife to the main character. Her constant, loving pressure on Stiv to “sort himself out” without overt threats and tantrums was part of what drove Stiv to realize just how much he did have in his life, that wasn’t provided by the pills. Her life affirmations and Law of Attraction principles gave a wonderful counterpoint to Stiv’s own fearful and depressing thoughts and dreams. The author’s flowing and descriptive style allowed the reader to get inside Stiv’s head and feel his pain along with him. As a debut novel, this was a successful effort and a great, satisfying read. I look forward to Book 2 in this series. A highly recommended read.

Cet For Life is a work of fiction in the interpersonal drama and social issues sub-genres and was penned by author B. Alexander Owen. Written as the opening novel in The Oxycodone Blues series, this intriguing drama contains explicit language, drug abuse, some violence, and sexual situations, and is, therefore, suitable for adult readers only. Set in the current and growing crisis of the American opioid epidemic, our central protagonist is Oxycodone addict Stiv Baker. When Stiv’s life begins to spiral out of control, we see the unraveling of his very soul and his battle with himself as he sinks lower and lower to get the drugs that he is addicted to. What results is a timely and intimate portrait of addiction and its casualties.

Author B. Alexander Owen has crafted a highly emotive and engaging tale that visits one man’s struggle not necessarily to kick a drug habit but to be at peace with his life in general and have some semblance of companionship and normality despite his issues. This realistic portrayal is brought about with excellent narrative techniques that show us Stiv’s struggles rather than telling us, crafting difficult scenes and emotional dialogue sections that get to the root of the problem and expose our protagonist in the rawest of ways. In terms of the big picture, this one struggle also serves to expose the wider social issue that it represents and offers much food for thought on the opioid crisis long after the reading experience is over. Overall, I would highly recommend Cet For Life to anyone looking for a contemporary and emotive drama experience.

Cet for Life--Book One: The Oxycodone Blues by B. Alexander Owen is a novel about one man's journey from drug-dominated days to redemption and recovery. It all starts at the drugstore when he (Stiv) can't get his prescription for pain meds filled. The story deepens and darkens during the withdrawal scenes. He jeopardizes his marriage and continues on his course of self-destruction. His trek from addiction to recovery is painful and all too real for those personally familiar with substance misuse, and the outcome is as refreshing as a fall breeze. The fact that the main character is a writer instead of the stereotypical ex-convict loser should be a sober awakening to the silent, stealthy work of drug addiction. It's easy to deny, easy to blame others, easy to blame the system, easy to blame the drug--and this story shows that in vivid detail.

B. Alexander Owen's writing captivates the reader in a way that makes you feel as if you're part of Stiv's inner circle--perhaps a neighbor, friend, or family member who is helpless in witnessing his character's downward spiral. He has a decent life, almost loses it, but can he hold on to sanity and the people he loves most? Maybe he can, with the help of the people who won't let him give up, and who don't give up on him. The author's descriptions and dialogue sparkle with detail and sensations that you can touch, taste, see and feel. Cet for Life--Book One: The Oxycodone Blues, by B. Alexander Owen, is the perfect wake-up call for anyone who's living with addiction--as a user, a co-dependent, or innocent witness. Besides the addiction aspect, Owen writes with ripe passion about how much Stiv desires his wife. And if you think men can't write romance, read this book.