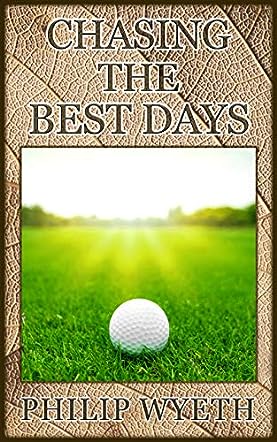 Originally from Northern Virginia, Philip Wyeth has lived in the Los Angeles area for many years. He’s an entrepreneur, musician, film aficionado, hockey fan, and enjoys playing tennis and golf.

Also a lifelong fan of heavy metal music and its many sub-genres, Wyeth strives to infuse his writing with comparable levels of intensity, independence, and larger-than-life visions.

His website is www.philipwyeth.com, and you can follow him across the social media landscape under the following handles:

From most points of view, Greg is living the dream. Chasing the Best Days by Philip Wyeth tells how after years of him providing for his family, Greg’s wife Robin decides that she is not happy and files for divorce. The resulting loss of the family, his home and the majority of his assets and income was hard, but after a good many years, he has managed to find some peace and equilibrium on the golf course. He works as a paralegal in an LA law practice, which he dislikes, and now lives in a modest apartment which is a long way from the home he had built for his family, but there are some compensations. He is a member of the Corona Vista Country Club where he indulges in his love of golf and where he met his current bedmate, the lissom Croatian Karla, a fellow golfer who is only half his age. Ideally, Greg would like to spend all his time at the golf club, drinking and hitting balls, but he needs to be richer, much richer. To this end, he and his pals start to develop an idea for an internet service company based on their individual skills. The idea looks great on paper but can they make it work?

I really liked Chasing the Best Days and I think the novel will resonate with a broad swathe of the male population. I’m fortunate in not having had to go through a divorce, but I have witnessed several in my family so I know the anguish, bitterness and financial insecurity it can cause. I found the subject brilliantly handled, though, by a talented author. I suppose one could argue that the storyline is a little one-sided, being told exclusively from the male standpoint, but that having been said, Philip Wyeth has created a great cast of characters whose lives, and particularly their rounds of golf, are beautifully described. Filled with pathos and good humor, I feel this novel is crying out for a sequel. I thoroughly enjoyed Chasing the Best Days and have no hesitation in recommending it.