The Treasure of Peril Island

The Treasure of Peril Island 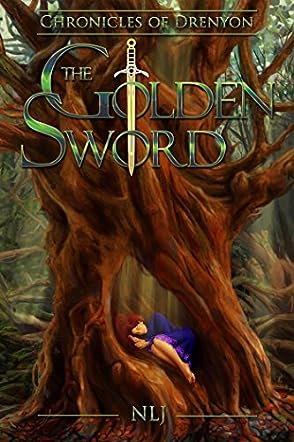 NLJ is an author, screenwriter, inspirational speaker, and former children’s educator. She received a Bachelor’s Degree in Film Production from the University of Southern California, and furthered her education to include children’s literature, personal development, and psychology. Her debut book, The Golden Sword, is book one of her four part series, entitled the Chronicles of Drenyon. Her hobbies include daydreaming, exploring, and eating chocolate.

Chronicles of Drenyon: The Golden Sword by NLJ is the first book in the Drenyon Series and details the journey of a young woman named Anya as she evolves from a relatively well-off and beautiful village girl into a true heroine. Like any good character, Anya tests the limitations that are set by society, seeking something more than just marriage to a wealthy man. With an ailing mother, impending poverty, and the pressure to choose a suitor, Anya finds comfort in the form of an enchanted tree, who tells her grand tales of another lifetime that end up being more useful than she could have ever imagined.

I am a huge fan of fantasy and this book did not disappoint! Chronicles of Drenyon: The Golden Sword is a wonderful read for preteen girls and boys alike, with plenty of action, adventure, and other worldly events to keep them enthralled from the very beginning. NLJ’s detailed depictions of both the setting and characters allow readers to quickly fall into the story, and you can’t help but want to hear more of the legendary tales that act as a history of Drenyon as the story continues to unfold. You’re taken on a whirlwind adventure as Anya sets out to save her village and ultimately the kingdom of Drenyon, facing bloodthirsty villagers, rabid prisoners, and depraved elves with nothing more than the tree’s stories as a guide. Together, she and the tree seek out the players from the stories as they attempt to piece together the reality and the prophecies in order to reach the golden sword that promises to save them all.

I enjoyed every bit of this book. I never could guess what was coming next. The tree man was intriguing. I would like to know more about him. Zumi matured to fulfil his destiny. Any didn't know her true worth or what a gift she is.

I know a twelve year old girl who will just love this book. The Treeman has to be a favorite and just the sort of 'good pal' that we all would love to have. Plenty of action, keeps on the move and ultimately is full of surprises and morals. It has a somewhat unexpected and simply lovely ending to the story. Enjoyed reading it.

Thank you so much for your encouraging review of my book. Not only do I value others' appreciation of Chronicles of Drenyon, but I also am so grateful of your acknowledgement towards the story's strengths. I strongly agree that this is a great story for both boys and girls alike. And I hope that many readers will join Anya through her journey as the series carries on.

Thank you again for your time and attention! :-)

I enjoyed the story. There were some great visual images in it.

You have an excellent flow... I hate the word flow when describing stories, but yours does a nice
job of keeping the reader involved the entire time. You do a very good job of not taking us out of
the action for too long, and stacking the odds against our protagonists. There is constantly
tension, and drama, and things that make you want to find out what happens. Anya… You have a
solid character with her. She’s determined and strong yet not without flaws, and you have us
pulling for her early on. A crucial character, and I feel like you nailed her.

Captivating story, the kind that allows you to dream and materialize its character…I’m loving it.

This is a fascinating read. There’s emotion, adventure, evil intentions, love, and friendship rolled into one
story. At the conclusion of each chapter, I wanted to absorb more and travel, with Anya, to her next
adventure and life lesson. I lived vicariously through her. I found myself thinking, “If I were Anya, how
would I handle this situation?”

The Golden Sword gives me wonderful nostalgia as if I'm back in my teenage years reading fantasy adventure stories like The Talisman and The Eyes of The Dragon by Stephen King! I'm
thrown into a world that's both intriguing and scary... Love it! It is rich in imagery, character and
suspense.

I enjoyed this story of a strong female protagonist who has to save her kingdom and it was fun to read something that's not contemporary realism. I also liked the mythology of Drenyon. And I enjoyed the parts of the book about Anya and her mother and would like to read more about that part of her life. Maybe a prequel even.

[This story] tells of Anya and her resistance to being matched to a suitor, or for not allowing
others to define her. Anya assumes the tree is just telling wonderful stories but [he] is actually
trying to prepare her for the changes in her immediate future.