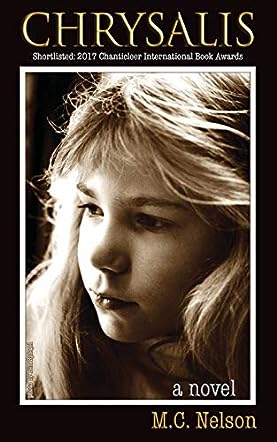 One look at the photo of the very sad child on the cover of Chrysalis by M.C. Nelson tells you this story is going to touch your heart, wreak havoc in your mind, and arouse emotions in your soul you didn’t know you have, like anger and disgust. And all of that will mingle with your disbelief that what Probity Jones shares with you about herself…and quite possibly thousands of other children who were used for CIA-sanctioned experimentation on mind-splitting…could possibly be true. Nelson states this story is fiction based on a true story. By the time readers finish the book, they will find themselves feeling it is more memoir, but one written by various key characters in Probity’s life. Each of these characters contributes to the story by sharing their personal motivations for their actions, the most important of whom, apart from Probity, is her father, Gent.

After “accidentally” being responsible for his younger brother’s death as an infant, Gent grew up broken, looking for ways to be a somebody. When he was recruited into sacrificing his own children, specifically Probity, for what he believed was a laudable service to his country, he jumped on it. In the years that followed, Gent evolved into a brutal, narcissistic man and the worst kind of father imaginable. By the time he died, and deservedly so, on a bloody Satanic altar, like a chrysalis Probity had retreated deep inside her protective shell. Only as an adult, after extensive therapy and the birth of her own son, did she find the strength to tell her story…the story you read in Chrysalis. This is a fascinating read, near impossible to put down. Even though Probity survives her ordeal and evolves into a motivational speaker on child abuse, Chrysalis leaves readers disconcerted and asking: “Could what happened to Probity be real? Could I, or my parents or my friends all be a Probity?” Perish the thought!