"B" is for Baylee Church of the Assassin 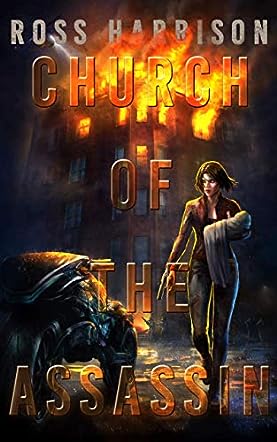 Church of the Assassin is book five in the NEXUS series by Ross Harrison but can be read as a standalone novel. Packed with plenty of action, the story follows Alexiares who kills for a living. She is an assassin for her sect, but things take a bad turn when she experiences betrayal, becoming the hunted. It is a situation that gets even more complicated because she has inherited a baby girl whose life she is putting in danger. But she is not leaving the baby behind, even if her path is on a collision course with Intelligence officer Ryan Blake; even if strong and vicious enemies with sophisticated tools and powerful resources are after her and the baby. She has lived by the unwritten code of her sect: “Kill one to save a hundred” and “Shoot first.” This time she will kill a hundred to save one or die trying. But she’ll shoot first!

This is an engaging tale of a killer who makes a powerful shift in the story through circumstances. Before Baby came into her life, Alexiares only knew how to twist necks, break bones, shoot, and handle machines. Now something in her has changed, thanks to Baby. The connection between the protagonist and Baby is wonderfully written and the author does a superb job in exploring how motherhood can alter the way that a sociopath sees life. Ross Harrison plots like a genius, filling the story with twists that readers won’t see coming. The conflict is well-written, and I liked how the author explores the shadowy sect to which the heroine belongs, allowing its effects on her to shine through the story. There is a lot of violence and gore and action, and some scenes are not for the faint of heart. The setting has strong dystopian elements; it is a universe that is complex, featuring all kinds of criminals and social issues. Church of the Assassin is fast-paced, a real thrill ride and a brilliantly executed page-turner.