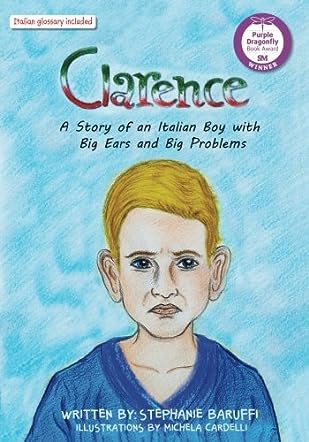 Clarence should be the happiest boy ever. He has a big, wonderful Italian family that loves him, his Nonna, his grandmother, is the best cook ever, and Stella, the family dog, always makes sure Clarence gets a big, wet, slobbery greeting when he comes home from school. School. That’s the problem. Clarence has unique ears; they are big and he gets teased and bullied by the other kids about them. Somehow, when his sister, Daria, teases him a little bit, and his older brother, Joey, makes jokes, it’s not hurtful but just part of playful family comments. One night when all the family members were gathered around the dinner table, talking loudly and having lots of conversations across the table, Clarence noticed that everyone else’s ears looked normal; his were very different and so the kids at school must be right. He quietly slipped away to his bedroom, but not without his Nonna seeing him leave the table. Clarence listened as Nonna told him some family history, especially about his grandfather who came to America in 1912, with nothing but the clothes on his back and a very special gift; a little silver bell given to him by his father. Clarence’s grandfather was hard working, handsome, and he too had large ears. Nonna gave Clarence the silver bell. Will this small and dainty object be able to help Clarence deal with the mean bullies?

Clarence: The Story of a Boy with Big Ears and a Big Italian Family by Stephanie Baruffi is a charming story about a young boy with quite an unusual difference; his ears are large. Do we ever really notice things like ears, which sit on the side of a person’s head, not really being obtrusive? However, kids who want to be mean pick on the seemingly most unimportant things to tease and bully someone who lacks self-confidence. I enjoyed the way the author portrayed Clarence finding the courage to stand up for himself and to retaliate, but not wildly just saying anything to his tormentors. Clarence wisely points out that the things he just said were things he didn’t have to say – he was making a point about how kids carelessly say things that are hurtful. This story is a lovely lesson in respecting your peers, being tolerant, being tactful and compassionate towards others. I also enjoyed the role of family in the story, how Clarence drew strength from his grandfather’s story, and from realising that he was part of, and loved by, a big, boisterous family, and how they all accepted each other. Delightful illustrations bring the characters and events to life for young readers and a little glossary at the back explains the meanings of Italian words used in the text. A great book for story time at school or at bed time.