The Secret of Plants in the ENVIRONMENT 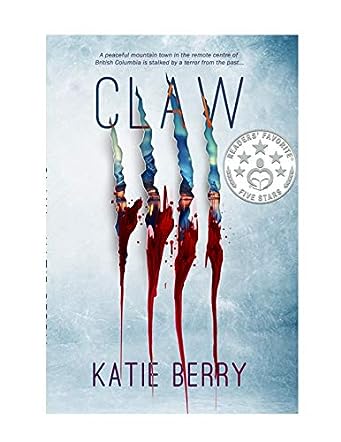 Katie Berry is a Canadian Author of Thrillers.

She writes what she enjoys reading — stories where the not-so-everyday encroach upon the everyday.

Katie is blessed to live in the beautiful West Kootenay region of British Columbia, Canada.

When she’s not writing, Katie is kept busy reading, sketching portraits, photographing nature, performing in musicals and burlesque shows, and laying down new grooves on her DAW.

And if she’s not doing any of the above, she’s usually outdoors enjoying the rugged, natural beauty that surrounds her, while keeping an eye on the forest, just in case...

Katie Berry, the author of Claw, transports the reader into the heart of the Kootenays where the gold rush of 1895 took place. Deep in the heart of the Cascade Mountains of Western Canada during the gold rush days, no one was safe in the town of Lawless. The name of the town, Lawless, speaks for itself for back in 1895 gold was prevalent as was theft and violence. That was then but now in Lawless, although the gold rush is over, times for the area are difficult with the change in the climate. Christine Moon is the new British Columbia Conservation Officer brought in quickly after the mysterious disappearance of her predecessor. Christine along with Austin and Trip, the local road and games authorities, band together to stop a ravenous predator that seems to be at the heart of multiple deaths, disappearances, and violent attacks. As Christine, Austin, and Trip track the ancient creature, they uncover a devious plot of corruption at the highest level in Lawless.

Claw by Katie Berry is definitely a thrilling page-turner. Her use of very graphic description and imagery, while telling the story of carnage, corruption and everyday life in the small mountain town of Lawless, British Columbia, truly draws the reader into the book. Not only is Lawless shrouded by the deadly ice fog at night, but uncovering what is plaguing the town and devouring the inhabitants is left up to our heroine, Christine Moon, the new Conservation Authority Officer, and her newfound friends, Austin, Trip, and Alex. With the knowledge and experience of the only survivor, Jerry Benson, the group sets out to locate and destroy the predator by any means. What they uncover while searching for the carnivorous beast is a story of corruption and murder that can bring the town of Lawless to its knees. Who will survive to tell the tale? I applaud Katie Berry for her work. She is an incredible story-teller and I look forward to reading more of her work.