by The Last Spiritual Samurai 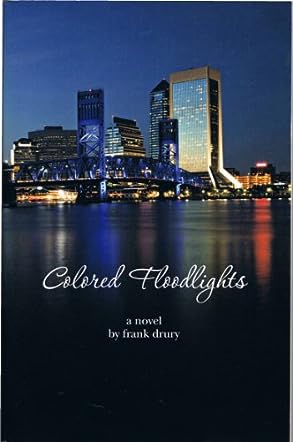 Frank Drury spent the early years of his career as a struggling screenwriter in Los Angeles before moving to New York, where he found some success in the high risk world of futures trading. This is where he gained the inspiration for his first novel, AN EMPTY SKY,which MIDWEST BOOK REVIEW said was "fascinating and thought provoking!" It is available in paperback, or as an ebook, through Amazon.com or BarnesandNoble.com.

Readers Favorite said of his second novel, A DREAM AWAY, "This plot successfully shines much needed light upon a subject few understand." It is currently available as a trade paperback or in all ebook formats. His latest novel, COLORED FLOODLIGHTS, was released in May of 2012 and received a 4-star review from Readers Favorite and is available in all formats! Frank lives in Jacksonville, Florida with his wife and daughters, where he continues to write fiction.

Parker Boyce's father served in Vietnam and talked of shooting out an entire Vietnamese village, referring to the dead as "gooks". Parker's uncle ran to Canada to avoid the draft of that Vietnam conflict as it was a war he just didn't believe in at all. Parker thought both his father and his uncle were wrong, so he served in the Iraqi war in the 1990's. Now Parker is married, trained as a psychologist specializing in Post Traumatic Stress Disorder. Parker, his beautiful California wife Katrina, and their young daughter Kimberly move from Manhattan Beach, California, to Jacksonville, Florida, where Parker sets up his practice once again. While Katrina begins an affair with a local county police detective, Ben Slater, Parker counsels Roy Calhoun, who served three tours in Afghanistan, and craves prescribed anti-depressants as he suffers from PTSD. Even though Roy's drug-crazed girlfriend shoots him, Parker takes Roy into his private life and offers him a job as gardener. Parker wants a string of colored floodlights around his patio and Roy hangs the lights just as Parker wishes. A squirrel eats through the floodlight wires causing Parker's home to catch fire. Roy rushes to rescue Parker, Katrina, Kimberly and Parker's mother Ginny. Has Roy really changed or will he always suffer wartime flashbacks?

"Colored Floodlights" is a story with a great plot line that questions whether war is worthwhile or does it bring casualties years after it is over. The main characters Parker, Katrina, Roy and Kimberly are totally believable, especially Roy, as he tries to get beyond PTSD. Adding Parker's mother Ginny is okay, phasing out Katrina's lover Ben Slater is too abrupt, but bringing on Katrina's sister Roberta and her mother Rose really adds too many subplots. It is good to have Roy accompany Roberta to war protests, but just one protest would be enough. Author Frank Drury's writing is really good, but cutting away Ginny's affairs and Rose's drinking would show the basic theme of a man (Roy) trying to follow the lead of someone he trusts (Parker). This is a recommended read for the thoughtful!