Path of the Spirit Runner 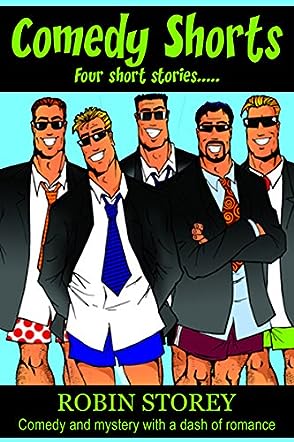 Robin Storey is an indie author from Queensland, Australia and has published five books so far in a variety of genres, from comedy crime to noir romance, all available on Amazon.

She is also a certified book nerd and is a useful member to have on your team on quiz nights for the literary questions, but not much else.

Robin also enjoys getting out in nature, especially on her 'digital detox' Sundays, by chilling out at the beach and hiking. She and her partner will be undertaking the Camino Frances pilgrimage across northern Spain in September 2016.

Comedy Shorts is a book of four short stories written by Robin Storey. Addicted to crime novels, Angie loses her job as an administrative assistant and considers becoming a private investigator. When one of her neighbours (Beryl Markwell) dies, Angie is convinced that the death is a homicide, regardless of the coroner’s findings that Beryl had died of a heart attack. Her unique investigative skills (or lack thereof) lead to shocking results.

At his father’s funeral, George starts to obsess about death. That night, the Angel of Death visits George to ask him for a big favor. It seems Death is feeling dejected as he is feared when he comes to take people’s souls. Death wants George to make him feel popular and loved. After several attempts at making Death popular, George’s life takes an unexpected turn.

Ali attends her Uncle Herman’s funeral, only to discover she is the sole inheritor of his vast wealth. While at his home, sorting through his belongings, Ali is confronted by two intruders who are desperate to find Herman’s hidden ‘stash.’ Ali is restrained and needs to use all of her wits in order to get out alive.

Esther is a budding author who has received yet another rejection letter in response to her manuscript submission. The following day, she spots a tiny man named Albert who stands on her dictionary, announcing himself as her muse. Filled with insults and harsh criticism of her novel, Albert begins systematically deleting pages from her manuscript. Before she knows it, Esther is signed and a string of best-sellers is penned, giving her wealth and independence but turning her into a recluse. She decides it is time to investigate who Albert really is, and receives the shock of a lifetime.

While the writing in Comedy Shorts is of a high standard, I would probably consider it as something other than comedy as all four stories revolve around a death and violence. Robin Storey’s imagination is endless and her presentation of each story is excellent. I recommend these stories to those who enjoy a bit of the macabre with a blend of mystery and a twist of supernatural on the side. These are great short stories, one and all. I loved the mystery element to each one. Great job.