Dayana, Dax, and the Dancing Dragon A Suffragette in Time 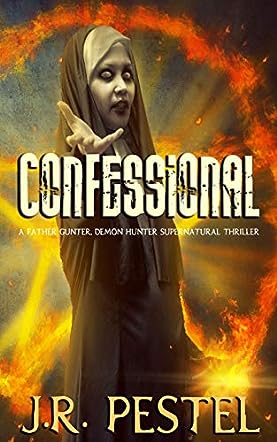 J.R. Pestel is an author who lives in the beautiful state of Arizona. She has always had a passion for the horror genre, and loves to let her imagination run wild when she writes.

Confessional: A Father Gunter, Demon Hunter Supernatural Thriller, Book 4 is a paranormal investigator/horror novel written by J.R. Pestel. Kaden Lunn’s biggest concern, as he sat waiting for his turn in the confessional, was whether he could come up with just the right amount of sins to confess to Father Batchelder. Too few and his confessor would find his confession wanting; too many and he’d be spending hours at the altar saying his penance. He looked up and saw Jenny Hill leave the confessional and approach the altar. His instinctive response to her had him wryly adding a sin to the list he had already prepared. One more person was ahead of him, and the elderly gentleman had just entered the booth, when a gust of air attracted Kaden’s attention. He looked and saw no open doors or reason for the errant breeze that had candles flickering and caused the heavy hanging lanterns overhead to shift and move. At the same time, he thought he heard a whispering, a sound so light he could have imagined it, and, turning, he saw her -- a nun, a young-looking one, whom he’d never seen before.

J.R. Pestel’s paranormal investigator/horror novel, Confessional: A Father Gunter, Demon Hunter Supernatural Thriller, is not the first book in her original and deliciously creepy series, but she includes enough background information to allow new readers to enjoy reading this as a standalone. I have serious doubts, however, that anyone who starts with Confessional will be able to resist going back and reading the three books that precede it. Johann Gunter is everything a horror/paranormal fantasy fan could ask for in a noir hero and his partner, former coroner Robert Durling, is the perfect foil for him. Pestel’s plot is original and compelling, and her story is startling, scary, moody and atmospheric all at once. Confessional: A Father Gunter, Demon Hunter Supernatural Thriller is most highly recommended.