The Roar of a Dragon The Measure of Ella Confessions of a Timid Rider 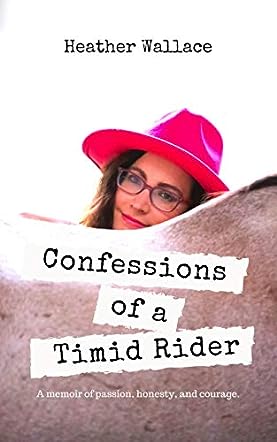 Heather Wallace writes about confidence, overcoming self-doubt and following her passion. She is the award-winning author of non-fiction titles Confessions of a Timid Rider, which details her insights about being an anxiety-ridden but passionate horse lover and Girl Forward: A Tale of One Woman's Unlikely Adventure in Mongolia. Heather is also well known for her blog, The Timid Rider, chronicling her journey as a returning adult equestrian with a lot more curves and a lot more determination.

By day, Heather is a Certified Equine and Canine Sports Massage Therapist dedicated to helping animals holistically. In her spare time, of which she has little, she spends her time with her husband, three children, two dogs, and pony in the wilds of New Jersey. You can follow her on social media @timidrider or at timidrider.com.

Confessions of a Timid Rider is a nonfiction motivational memoir written by Heather P Wallace. Wallace grew up with an absolute obsession with horses. As a child, she had already made plans to have breeding stables filled with Arabian horses. Her toys of choice were stuffed horses, and her favorite literature, of course -- horses. Whenever there were horse rides at carnivals or parties, she was the first to want to ride. Her big and long-awaited adventure came when she was nine years old. The family was on vacation in Arizona, and her dad had turned into a driveway for a stable yard advertising trail rides. Wallace was the first to be mounted and ready to ride. Her pony was gray, her favorite color. Suddenly her confidence took a nosedive, and panic set in. Her little sister caught on to her older sister’s fear, and the two girls began sobbing on their patient steeds until they were helped to dismount. Wallace’s first ride in the desert never did happen, but she did spend the time, while her dad rode the trails, grooming her gray pony and falling ever more deeply in love with all things equine.

Heather P Wallace’s nonfiction memoir, Confessions of a Timid Rider, is a marvelous and inspirational work written by an author who has repeatedly faced her fears and accepted the inevitable setbacks as they occur, and still has managed to live her dreams. I loved reading about her experiences with her horses, especially Earthly Delights. Her frank and honest discussions about anxiety and the “what-ifs” that can work to deprive one of their self-confidence are quite helpful, and I’m sure anyone who reads this remarkable book will see themselves in at least some of Wallace’s work. Readers are fortunate indeed in Wallace’s other love being writing, which she does well. Her memoir is a joy to read. I finished it having learned a lot about horse and equine behavior, but I also was a witness to her triumph over that timid aspect of herself on almost every page. Wallace’s courage and resilience is something to cheer about, and her memoir records it brilliantly. Confessions of a Timid Rider is most highly recommended.

Confessions of a Timid Rider is a memoir by Heather P. Wallace. Like many girls, Heather was enamored with horses as a child, but some time in her teen years she left horses behind to pursue other goals in life. It wasn’t until after Heather had children of her own that she rediscovered her love for horses and the joy of riding. She converted her joint passions for riding and writing into several small businesses which she continues to this day. Heather became a Certified Equine Sports Massage Therapist and she writes for multiple publications including her successful blog. Through it all, she has had to overcome personal fears and anxieties, which she writes about very candidly.

Confessions of a Timid Rider starts as a personal history/memoir, but as it goes along it reads more like a succession of blog posts. I was very impressed with Wallace’s honesty and candor as she shares her personal struggles. Frankly, I think she underestimates herself. I found her to be like the Cowardly Lion – anxious, yes, but actually very brave. Confessions of a Timid Rider will appeal to horse lovers, but also to people who are looking to overcome their own anxieties to accomplish their dreams. It is helpful to know a little about horses, but you don’t have to know much to enjoy Confessions of a Timid Rider. I found the book to be conversational and relaxing to read. Make yourself a cup of coffee and enjoy the heartfelt writings of Heather P. Wallace.

Confessions of a Timid Rider by Heather P. Wallace is a memoir about how one woman overcame her self-doubt to pursue her lifelong passion of working as a horsewoman and writer. When Wallace writes of being timid, she writes not of a fear of riding, but of being afraid to fail, of not living up to her own expectations, or of letting her insecurities defeat her. Her confessions begin with her first unsuccessful trail ride as a child and continue through her adolescence, college years, and adulthood as a wife and a mother. At all times, whether actively pursuing her love of horses or not, she always felt the pull back to the stables. Confessions of a Timid Rider details that pull in a series of short, blog-like chapters that provide both her confessions, solutions, and the wisdom she’s acquired along the way to achieving her dreams.

There’s much to appreciate in Heather Wallace’s Confessions of a Timid Rider. Wallace is detailed in the recounting of her experiences and refreshingly honest about her emotional conflicts, especially her anxiety and fears of failure. A self-professed ambivert, Wallace’s confessions take us through her first riding lessons, her experiences becoming a wife and mother, and the risks she took leaving a successful writing job to start her own business and follow her passion. Obviously cathartic for Wallace, the writing of this memoir will center her—and perhaps the reader—for future challenges. I think many people—especially women—will appreciate her struggles with confidence and will delight with her as she reveals how she worked her way through. Her love of writing and fear of writing for a public audience have a similar trajectory in the memoir, which is also quite relatable and real. In addition to the self-reflection, there is great narrative value in what Wallace writes about her time with horses, which I found informative and highly enjoyable.