One Alone in the World Courage Between Love and Death 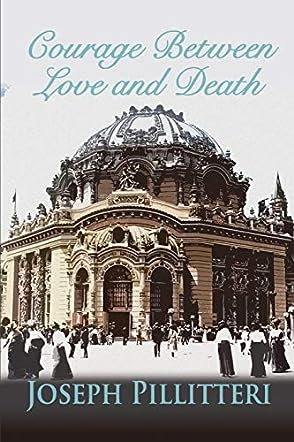 Mr. Pillitteri heard the story of the assassination of President McKinley at the 1901 Pan American Exposition many times when he was growing up in Buffalo, NY. Many authors since then have described and analyzed what happened to both the president and his assassin. COURAGE BETWEEN LOVE AND DEATH takes a more personal look as it describes what happened to the surgeons and nurses who cared for him during surgery and the seven days he lived after that.

Courage Between Love and Death, a gripping historical novel by Joseph Pillitteri, is so well written that fact and fiction seamlessly weave together to form a brilliant tapestry that is a feast for the mind and the senses. The year is 1901 and the Pan-American Exposition in Buffalo, New York has made history with the arrival of the president of the United States, William McKinley and his sickly wife. Young Elspeth “El” Shaughnesshey is a newly-minted nurse, having graduated from Bellevue Hospital, and is now serving at the Pan-American Hospital where she puts up with the abuse meted out by Dr. Quentin Augustus Kingdom Jr., the hospital’s senior intern, as well as the other egotistical doctors she must serve, all for the paltry sum of fifty cents a day. However, Elspeth needs every penny of it as it helps her widowed mother feed the many mouths in their large Irish brood. Now with an eviction notice looming over her mother’s small upstairs flat, Elspeth sets her sights on the very eligible, albeit unkind, Dr. Kingdom as a potential husband who could end their poverty – if only she wasn’t so attracted to the new intern, Dr. Gunner. However, Elspeth’s personal problems are soon cast aside as unrest looms with the president’s visit – until the unthinkable happens…

Courage Between Love and Death gives readers an unvarnished look at life at the turn of the last century, where there seemed to be only two classes – the very rich and the very poor. Elspeth’s family, Irish immigrants, made a living any way they could and were part of the countless number of immigrants that had come to America and now struggled to survive amid the prejudices of the time. Pillitteri paints a vivid picture between the haves and the have-nots; resplendent crystals, jewels and gowns amid disease-infested streets, where rats feast on decaying carcasses of fallen beasts abandoned in the middle of the street. This was America at the turn of the last century and it’s not a pretty picture, despite the impressive backdrop of the grand Pan-American Exposition that has drawn huge crowds, including the president of the U.S.

Elspeth Shaughnesshey is the perfect protagonist for her time. Fiercely proud yet determined to rise above her station in life to help her family, she’s the backbone of the book – a heroine with many flaws who effortlessly commands a reader’s empathy and support. Despite the many challenges she faces, both personally and professionally, Elspeth manages to get through it all with a certain grace and a growing emotional maturity beyond her years. Pillitteri also gives his readers a first-hand glimpse into the medical profession of the era. Primitive practices and unhygienic conditions fueled by huge egos – all of these make for unsettling bedfellows in the practice of medicine that few would argue was still in its infancy back then. Well-researched with the perfect combination of compelling characters and fascinating storyline, Courage Between Love and Death is a gripping tale from start to finish and well worth the read.

Everything starts somewhere. For Elspeth, it is landing a nursing job at the Pan American Exposition Hospital in Buffalo, NY. It is 1901, and this opportunity is one most coveted by many and one that promises a future for Elspeth, a great beginning and hope for her family. But the job turns out to be more than anything she’d imagined with the increasing stress of having to deal with a large number of patients, handle overbearing doctors, and face the reality of prejudice and cutthroat competition from other nurses. She has no choice but to push on, because she is the breadwinner and the family bills are on her. But things take a dramatic, tragic turn when President McKinley’s visit turned out to be an event that would mark the assassination of the twenty-fifth President of the United States. Read on to discover how this event gets Elspeth involved and the dangerous path she must walk to clear her name and to secure the lives of those important to her.

The reader is immediately introduced to the conflict from the prologue, a very brief statement of what the story is about. The writing is as focused as the plot, and there is no distraction at all from the narrative. Joseph Pillitteri’s writing is flawless and delightful. The tension builds up very fast and doesn’t slow down until the satisfying conclusion. Courage Between Love and Death is focused, deft, and balanced, and the reader will follow the protagonist through her emotional and psychological turmoil until the very last page. A gripping story with great historical references, it’s an edge of the seat read. Courage Between Love and Death by Joseph Pillitteri is a historical novel that is well-researched and written to great satisfaction.

Courage Between Love and Death by Joseph Pillitteri is a historical novel that explores the circumstances surrounding the assassination of the twenty-fifth US President McKinley and one woman’s gritty story and the role she plays in the tragedy. When Elspeth Shaughnesshey accepts the job as a nurse in the prestigious Pan American Exposition Hospital in Buffalo, it is like a dream come true for her and she begins to envisage a better life for herself and her siblings. But a few days into the job, she faces great challenges, including the large number of patients all clamoring for help, the cocky and demanding doctors, and the nurses who would do anything to put her down. Keeping her morale high, she perseveres, but things take an unsuspected and spiraling turn with the president's visit and his assassination. Elspeth is in a tight spot and finds herself in a race to clear her name and regain her life, but can she?

Courage Between Love and Death is a well-researched and masterfully crafted historical novel with strong characters and a mesmerizing plot. Apart from developing a very strong conflict, Joseph Pillitteri does a brilliant job in weaving powerful dialogues and intrigue into the story. The reader is transported into an atmospheric world with medical personnel, strong personalities, and a historic event that will remain engraved in the minds of many. There is so much to enjoy in this novel — the drama, the emotional and psychological intensity of the story, the excellent prose and the compelling characters. I was sucked into the narrative from the very first page.