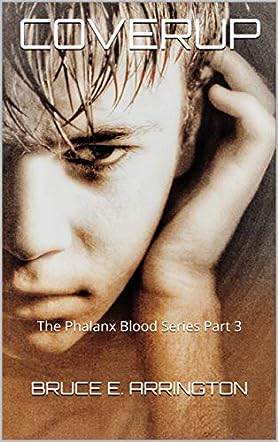 Coverup: The Phalanx Blood Series, Part III is a young adult serial thriller written by Bruce E. Arrington. Life was a beach for Bernard these days, literally, as his home was now a three-story, 10-bedroom beachfront mansion. His days were spent training with his bodyguard, Alexis, his five German Shepherd dogs, and his three best friends. That day, a game of Capture the Flag had brought to Bernard’s attention just how much faster a runner Charlie was becoming these days. Each of the three sixteen-year-olds was developing new skills as part of their survival strategies. Suddenly, however, shots rang out, which put a swift and deadly end to the day’s recreation. Alexis ordered Bernard to get to his safe room, and as he sprinted toward the house, he was stunned to see Betsie, his dog, downed as a result of the attack, and Charlie, who had been hit by gunfire, lying on the ground and bleeding. But the worst was yet to come.

Bruce E. Arrington’s young adult serial thriller, Coverup: The Phalanx Blood Series, Part III, continues the exciting, high-tech story of the teenager with the miraculous blood -- blood which can beat any cancer out there. I’ve read each of these marvelous novellas and have loved watching as Bernard and his friends adapt to their new, challenging lives and come of age under the most extraordinary circumstances. You can read Coverup as a standalone, but don’t. This series flows beautifully, and you won’t want to miss a thing. I particularly enjoyed witnessing the developing working partnership of Bernard and Alexis. Arrington’s plot is well-constructed and dynamic, and his characters are authentic and believable. Coverup: The Phalanx Blood Series, Part III is most highly recommended.