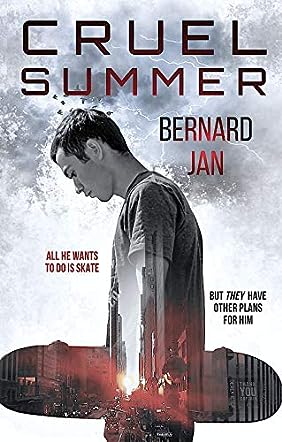 Bernard Jan is a pen name of an award-winning novelist and a poet from Croatia, and he has released four books in English.

A World Without Color is a true story of the last three days he spent with his cat, while Look for Me Under the Rainbow in a unique and gentle way sheds light on the plight of harp seal pups in Canada. It warms the heart of all readers concerned about our planet and its treasures. January River is a heartwarming cross-genre novel about five friends, one dog, and one river carrying a secret. His latest YA cross-genre novel, Cruel Summer, is a gripping story of an abused teenager from New Manhattan who only wants to skate, but they have other plans for him.

His first two books were written at the beginning of the war in Croatia in 1991 amidst air alerts and illusory attempts when he wanted to believe and think that life is normal, that everything is all right with the world. He has published five novels, two novellas, and one book of poems in Croatian. Four of his books, including the book of poems, were translated into English.

His desire to help others came to the fore during his years advocating environmental protection and advocacy of animal rights. As part of his animal advocacy activities, it has been a great honor and pleasure to translate Eternal Treblinka: Our Treatment of Animals and the Holocaust by Charles Patterson into Croatian.

In Bernard Jan's Cruel Summer, Michael is a seventeen-year-old boy living in New York. Michael loves skateboarding and wants to ride professionally. He and his abusive father, Hank, don't get along, and his mother died a few months ago. Michael's sister, Rebecca, is in Denver visiting their grandparents during summer break. Both Michael and Rebecca miss their mother a lot and deal with her death differently. Michael goes to visit his mother's grave often. Michael begins to have visions where he can see things that happen and he tells his sister. His dad suggests that he sees a psychiatrist who becomes a trusted ally. Michael's therapy sessions are going well and his sister begins to find relief after their mother's death until something tragic happens. Their father is dead, and Michael is the assumed killer. It's summertime, but the weather is cold like winter, and this is turning out to be quite a cruel summer.

Bernard Jan's Cruel Summer is an emotionally gripping story, full of love, friendship, loyalty, family drama, and skateboarding. Bernard did a wonderful job of creating a beautifully written and compelling story that is very descriptive so that the reader feels immersed in the story. I enjoyed the detailed skateboarding stunt instructions at the start of each chapter. His characters were brilliantly written and very compelling. Bernard's writing is full of twists and turns that keep you interested from the very beginning. An excellent read. I look forward to reading more stories by this author.