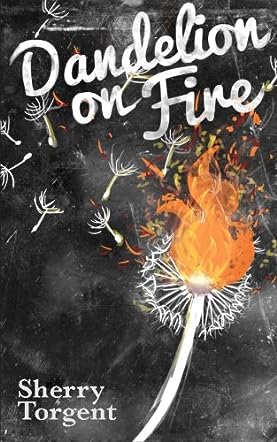 Sherry Torgent is the author of Like Ice and Dandelion on Fire (Greene Island Mystery, Book 1). She writes creative, fast-paced, young adult novels with sci-fi or supernatural elements that are known to keep her readers turning the pages late into the night. She lives in Raleigh, NC and is currently working on the second book in her Greene Island mystery series which will be released early 2016.

Where do I even begin with Dandelion on Fire by Sherry Torgent? This book is a genre-bending blend of coming-of-age, romance, mystery, sci-fi and fantasy neatly bundled as a book with a simple dandelion puff aflame on the cover. In it, we follow socially inept Hardy as he stumbles into a complex plot bigger than himself. Somehow the mysterious girl he has detention with is connected to his grandfather, who is supposedly dead but is definitely still alive since he takes care of Hardy after school. Throw in some high school drama and a secret government program, a best friend who has special abilities other than cricket noise ventriloquism, and a three-hundred-year-old curse, and you've got a crazy roller coaster of a ride that does not end the way you expect it to. As if you could expect anything trying to combine those crazy elements. But Torgent pulls it off and she does it AMAZINGLY.

It's not often that I can't predict a book's ending but this one got me. And how in the world Torgent was able to squeeze so many non-stereotypical characters and genres into one YA novel is beyond me. She has a gift. There is just so much in this novel. It's hard to even describe what this book is about but it's still so, so good. This novel truly stands out and is a breath of fresh air for the YA genre. Torgent shows us that we can have knock out, new YA stories that are intense, heart-breaking, deep, clean, and mind-blowing without being numbingly stereotypical, raunchy, and a wash-rinse-repeat of everything else in the YA mystery/sci-fi genre. She has earned a loyal fan with this book and I will be reading anything else that comes from Torgent, especially book 2 of the Green Island Mystery series.