Dangerous in a Kilt 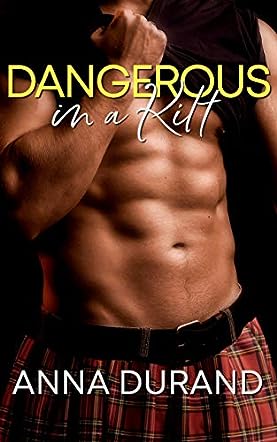 Anna Durand is an award-winning author of sizzling romances, including the bestseller Dangerous in a Kilt, recipient of a 2016 National Readers' Choice Award and an Honorable Mention in the 2017 Readers' Favorite Book Awards. The Hot Scots series emerged out of a love for all things Scottish she inherited from her late father. While she researching a planned Scottish historical romance, she realized she really needed to write a hot Highlander romance ASAP. A new series was born!

Dangerous in a Kilt: Hot Scots, Book 1 is a sizzling romantic novel written by Anna Durand. Anyone who knew Erica Teague would never have expected to see her perched on a bar stool in Chicago’s Dance Ardor. The nightspot was an underground club that catered to an uninhibited clientele and boasted of the private booths that were available to those seeking a bit of adventure. Erica was there to meet a man named Cliff, whom she had met online. While she had given him her picture, he had never reciprocated. As their 8:30 meeting time neared and then receded into the past, Erica figured she had been stood up -- by a blind date, no less. She wondered if he were actually in the club and had decided to give her a pass. Erica wondered how she couldn’t even succeed at an anonymous sexual encounter with a stranger, but then her world was changed forever when a pair of strong hands magically appeared just as she was poised to fall flat on her face. Her rescuer was a big man whose muscular torso was quite visible through his tight black t-shirt, and she couldn’t help but marvel at the way his thighs met where his kilt began. When he greeted her by name, Erica figured that Cliff had come after all, but she was soon to discover that her gorgeous hunk from Scotland was someone else entirely.

Anna Durand’s sizzling romantic novel, Dangerous in a Kilt: Hot Scots, Book 1, is an enthralling and entertaining read about two damaged people who meet under the strangest of circumstances and share no intention at all of entering into serious relationships. Durand’s erotic writing is lovely, respectful, and entirely relevant to the growing emotional ties that Erica and Lachlan forge in spite of their mutual determination to enjoy their month together free of emotional entanglement. Seeing each of them learning to trust and to allow themselves to be vulnerable again is a major highlight of this compelling book about love, betrayal, and second chances. I had a marvelous time reading this hot and spicy-sweet romance. Dangerous in a Kilt: Hot Scots, Book 1 is most highly recommended.

Dangerous in a Kilt by Anna Durand delivered! A hot but wounded hero, a heroine who is strong on her own but also needs the hero. and sex that will scorch the sheets without any kinks or fetishes. [...] It was the journey, characters and smoking hot sex scenes that kept me turning the pages.

[Anna Durand] knows how to make her hunks and heroines sizzle…combining a stylish prose with steamy romance. Ever wonder about the question of kilts and what they disguise? Then you will be set for a fast-paced, irresistible ride as Anna makes her well-sculpted novel a high on erotica.

There’s a huge hero’s & heroine’s journey here, that I quite enjoyed, not to mention the hot sex, & again, not to mention the sweet seduction of the Scotsman who pulls out all the stops to get Erica to love him, while he fights off the ex. I think you’ll like this one.

This book was such a fun and dramatic read! The fun was in all of the witty banter and super sultry scenes. I loved all the Scottish words Lachlan mixed into his sentences and could imagine his sexy accent in my mind. I didn’t blame Erica for lusting after his hot body and smooth words. He was almost too hot to handle! […] The way they navigated around their secrets was so much fun to read.

Really, how could Erica not fall for the Scottish sex god. He was sweet, charming, romantic, thoughtful, had a voice that could make you weak in the knees and HE WORE A BLOODY KILT. […] With all the romantic gestures and surprises he planned for her, his most thoughtful gift was helping clear her name from the embezzlement charges. Money may not buy love but, in this case, it helped set his love free.

I really loved this book. It was very entertaining with the right amount of great story and sexy highlander. Anna Durand was able to weave two memorable characters that will capture your mind and heart. […] Anna Durand has truly mastered the highlander romance.

[The story is] hilarious and so stinkin' cute, I found myself totally captivated by the main characters right from the start. [...] Sweet funny romance...a great read.