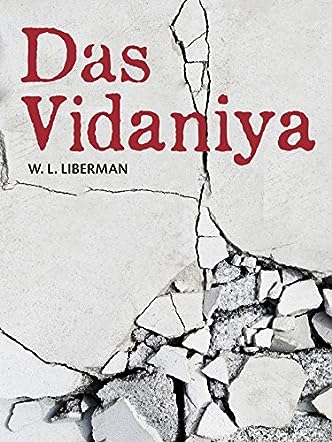 Das Vidaniya is an historical fiction novel written by W.L. Liberman. He had watched her grow up from a tiny girl, the grandchild of his neighbors and friends, the Robinsons. Beulah Robinson was seventeen now, but the years had not been kind to her. She was addicted to crack cocaine, and it had nearly destroyed the child of light and wonder he had delighted in watching grow up. Mordecai wanted to drive her to the hospital, but Beulah had been adamant that she would prefer to die on his floor than go there. She asked him to tie her wrists and ankles as she lay on the cot in his second floor bedroom. He had fed her chicken soup, a spoon at a time, and had watched over her in the long hours since she had arrived. She asked him for a story to distract her from the torments she was suffering, for his story, for him to talk to her and not stop.

Mordecai had never really shared his story, all of it, with any other person, and he had to think about what she was asking. But there was no one left for him, and like the helpless child he was caring for, he had nowhere to go. And so he began. It was in 1925, in Krasnowiecz, Poland, that the hatred felt by many Poles towards their Jewish neighbors led to his little brother rushing home with a knife still lodged in his shoulder. His friends, he said, wonderingly, had done it. Their sister, Katya, who would one day become a doctor, knew how to treat his injury, and Mordecai, feeling a rush of anger fill his heart and soul, demanded the names of those so-called friends. He would exact some measure of vengeance upon them. It was what he did.

W.L Liberman's historical fiction novel, Das Vidaniya, is the story of Mordecai Goldman, a Polish Jew, who grew up in the village of Krasnowiecz in the 1920s, fought with the Poles against the Germans, and then later drove the Germans back from Stalingrad to Berlin as a captain with the Russian army, and his story is a riveting one. Mordecai is complex, hot-headed and impulsive. His talent for fighting is honed by the training he receives from his father's friend and partner, Frederick Valens, a boxer of some renown, who toys with the fuming child, using the anger he so easily stirs up to help Mordecai develop the latent talents and self-discipline Frederick sees within him. As I read of their sparring, I became totally engrossed in this World War II tale which focuses on the plight of Jews in Poland and on Germany's campaign into Russia.

Das Vidaniya contains some of the finest WWII historical writing I've encountered. Liberman highlights the gallant, doomed efforts of the Poles whose horses were of little use against the tanks and machinery of the Germans, and he brings to life the rigors felt by both armies during Hitler's march into Russia. I was mesmerized by Mordecai's accounts of his battles, his memories of those fellow soldiers who became so much more than friends, and Olga, the General’s daughter whom he loved and never forgot. Das Vidaniya is a monumental book. There's so much history contained within its pages, and the characters one encounters are unforgettable, especially Mordecai, as he relives his life story to comfort a young girl as she suffers the withdrawal symptoms from her addiction. Almost Russian in its scope and intensity, Das Vidaniya is a moving and inspiring literary work, and it's most highly recommended.