A Tale of Heartbreak, Courage, And True Love
by Lincoln Tuvelais
Romance - Historical
228 Pages
Reviewed on 06/12/2021 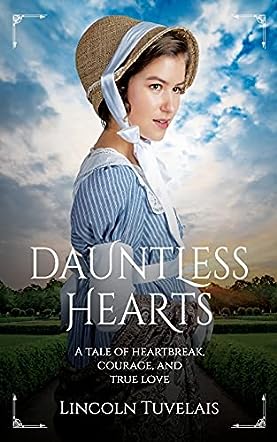 Lincoln Tuvelais, a retired Texan, lives in Kuala Lumpur. She succumbed to the madness that compels otherwise normal people to write novels. A self-proclaimed nerd, Lincoln embarks on hours of research to ensure she gets the history in her stories right. Her garden is her happy place and often the site of inspiration. Lincoln has a soft spot for big dogs and is on the look out for her next canine love to keep her company as she works on her new novel, which is due to be released in 2021.

Dauntless Hearts: A Tale of Heartbreak, Courage, and True Love by Lincoln Tuvelais is a Regency romance with a bit of a difference. Kitty Otis is not your typical, simpering young woman desperate for a husband during the London “Season”. No, Kitty is indeed a beautiful, young woman but smart, business-savvy, and strong-willed to go along with it. With her ailing former pastor father in tow, Kitty embarks on turning around a rural northern England estate that has somewhat been left to rack and ruin. With her modern, scientific farming methods, Kitty won’t endear herself to everyone, though. When she meets a brash, young Irish nobleman, the atmosphere is immediately electric for both of them but any relationship between the pair is bound to be fraught with political difficulties as his Irish family treat the British with as much disdain as they themselves consider the Irish. Despite appearing for her “debut” season in London, Kitty is lacking suitable suitors and perhaps must consign herself to achieving her business dreams ahead of her romantic notions.

Dauntless Hearts is a genuinely warm and at times quite funny dip into the waters of Regency romance. The period around the beginning of the nineteenth century is ripe for a clever author to highlight the disparities between the “haves” and the “have-nots” and the all-pervading strictures of the class system. This is something Lincoln Tuvelais does superbly, with the character of Kitty. Kitty is, in today’s parlance, a strong, independent, and free-thinking woman, none of which would be seen as a leading characteristic for a young lady of the time. What I particularly liked about Kitty was her warmth and her compassion, which served to feminize other aspects of her nature that would be seen as vulgar and crass in a woman in 1812 or thereabouts. This is a character a reader can definitely get behind and root for and I did enjoy the twists and turns in the plot the author threw in from time to time to ensure a reader never lost interest. The style is as you’d expect from a period piece, redolent of the times and its unique language, customs, and manners and beautifully written throughout. This was a relaxing and thoroughly enjoyable read that I can highly recommend.

Kitty, a vicar’s daughter, is set to establish her own house in the country. Her mother has passed away and her father is unwell and thus unable to continue his work with his parish. Settling for a derelict cottage, she uses her mother’s inheritance to spruce up the place and she takes her father to live with her at Dixon Cottage. She also takes her prized horse, Othello, and it’s on one of these rides that she meets a dashing young Irish lieutenant. Put off at first by his forwardness, she doesn’t set her sights on him as a possible life partner. But, he is persistent and the two develop a relationship. Kitty suffers a terrible heartbreak, but love is still on the horizon for this very ambitious, loving, caring young lady.

Lincoln Tuvelais’ Regency novel, Dauntless Hearts: A tale of heartbreak, courage, and true love, is set in the early 1800s in rural northern England. The author weaves a fascinating tale of love, compassion, and resiliency, making the female protagonist, Kitty, far stronger than one usually finds in literature of this period. Like the ever-popular Jane Austen novels, this story is rich with detail reflective of the era and the setting. The characters are well developed and the plot is complex and entertaining. The dialogue is profuse and historically characteristic of the era. The author has obviously done considerable study into the Regency era, as this story accurately depicts it. Full of romance and historical delicacies, this is a fascinating read.

Dauntless Hearts: A Tale of Heartbreak, Courage, and True Love by Lincoln Tuvelais is a historical romance novel that features a heroine ahead of her time. Kitty Ottis and her father, a former vicar, move to a lovely cottage near Keswick. Though she had always longed to manage her own household, Kitty feels overwhelmed by the new prospect. Still, with the help of a skilled farmer, Kitty significantly develops the land and increases its production. Her friendship with a new acquaintance, Marianne, deepens. Later, both women support each other through wonderful times and tragedies. Kitty also meets a dashing Irish lieutenant. Though put off at first by his unrefined ways, she falls in love with him.

Evidenced by her treatment of those who work for her and her decision to adopt a destitute young boy, Kitty is a kind and likable main character. She is also strong-willed and outspoken. Dauntless Hearts contains humorous scenes that make it captivating. Lincoln Tuvelais effectively uses period language to create conversations and scenes that fit into the time period the story is set in. Social norms that influence the characters’ lives and decisions also help make the story realistic. Aside from the romance, there are other revolving themes including family and friendship. Parts of the novel are told through letters exchanged between Kitty and her family or her friend, Marianne. The letters also help create convincing characters. Dauntless Hearts by Lincoln Tuvelais is a delightful historical novel with interesting characters.

In Dauntless Hearts by author Lincoln Tuvelais, young Kitty Otis is thrown into heavy responsibilities in the late 1800s after the death of her mother and the illness of her papa, Merit Otis, brought on by the loss of his beloved wife. Kitty takes up the mantle of the mistress of the household, a task she would one day want, but now it’s been thrust upon her young shoulders. Her uncle and guardian, Perry Tinsley, caring for her inheritance from her mother’s estate, is on hand to help advise Kitty on matters. Now having to move from her childhood home and purchase a smaller home, Uncle Tinsley is by her side to help secure a suitable property at the right price. Kitty’s shrewd negotiating skills impress her uncle greatly, securing Dixon Cottage near Keswick. Now begins a life of new friends and acquaintances and hope of success in her role as mistress and small farm owner. Kitty meets and falls in love with Joseph McLaughlin, a Lieutenant, not realizing his family has a vast estate in Ireland when she and a small party visit his family home. Feeling sad at her rejection by his mother and brothers, she finally concedes they have no future together. Kitty returns to Dixon Cottage and Joseph leaves for a future in the newly discovered Australian colony. Follow along as Kitty weaves a new life for herself.

Lincoln Tuvelais writes beautifully about life in the 1800s and helps you understand the etiquette of the period. All the difficulties faced by members of society living at that time are brought to life and our feelings of happiness, sadness, annoyance, and joy are entertained, making Dauntless Hearts an excellent read for all lovers of this genre and an ideal place to start your introduction to it. Describing the characters with all their good points, along with their flaws, helps you get a good feel for how they interacted with each other and how life played out at that time. Their hopes and dreams and the expectations of those around them give you a flavor of the period. Wonderful scenes are described and the routines of life are very much a focal point throughout this enjoyable book. Dauntless Hearts is certainly on a par with the Bronte books and I would highly recommend it.

Dauntless Hearts: A Tale of Heartbreak, Courage, And True Love by Lincoln Tuvelais is a historical romance set in 1812. All Kitty ever wanted was to have a family of her own. A nice husband and little ones to keep her company were all she asked for. But with an ailing father who relied on her, Kitty knew she could not have her London debut even if she wanted. However, that all changed when she came across Lieutenant Joseph McLaughlin of the Royal Irish Fourth Dragoon Guards. He was too forward, a little too charming, and a little too handsome for Kitty. But before they knew it, love blossomed between them and a proposal was made. However, it all went downhill when the families were involved. Joseph was everything she ever wanted but was he what she needed? Was he destined to be her forever love, or was she going to remain a maiden?

Oh, what a surprising novel this was! I was not expecting Kitty’s story to take such a turn. Kitty was almost naïve and too innocent in the beginning, but she grew to be mature and intelligent. She knew dreaming was good, but she needed to face reality before it was too late for her. Her relationship with Joseph McLaughlin was comforting, it was soothing and exactly what the two of them needed to grow up and develop. I loved how descriptive the narrative was. Author Lincoln Tuvelais let the characters speak for themselves and tell their own story. Kitty was the highlight of the story; she took charge and she was proud of the decisions she made. Dauntless Hearts: A Tale of Heartbreak, Courage, And True Love is the perfect example of how love changes you and sets your priorities straight.