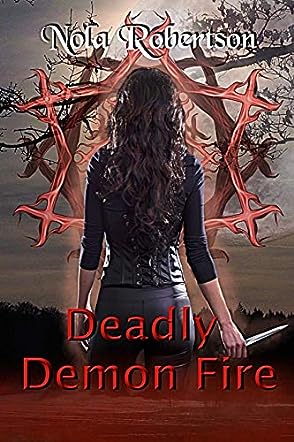 Nola Robertson is an award winning author of paranormal romance. She is also an artist who enjoys designing her own book covers.

The only thing she loves more than reading about hot, ripped, and dangerous alphas is writing about them. Her days are spent delving into the otherworld, and writing stories filled with strong, sassy heroines, and even stronger, sexier heroes.

A mid-western born girl, she now resides in New Mexico’s land of sweltering heat and dehydrated lizards with a supportive husband and a clutter of cuddly cats.

Her first book in the Wicks Hollow Witches Series, Deadly Demon Fire, was the winner in the 2016 Lone Star writing contest.

Deadly Demon Fire: Wicks Hollow Witches, Book 1 is a paranormal investigator mystery novella written by Nola Robertson. Alex St. Claire was determined to get a lead on the case of the three witches who had disappeared while on campus. Her uncle, whose St. Clair Investigations agency had been hired by The Wicks Hollow Coven, would be furious if he knew she had broken into the dean's office and hacked his computer to learn more about the women, but she was determined to gain his respect as a fully-fledged investigator. It was hard for her dealing with the fact that she was unable to control her elemental powers and had, for that reason, been denied admission to the coven. She did manage to slip into the dean’s office, hack the computer and get out again without causing an outcry, but now it would be a challenge for her to get to class on time and take her investigator's license test. There was a shortcut through the woods that might help her cut off a few crucial minutes, but the school had issued a warning about that shortcut ever since those women had gone missing. Still, she decided to give it a try. Uncle Drake, after all, would be furious if she missed that test. But then the humming started as she entered the center of the park, and magical energies surged through the nighttime air, and she knew she was in the presence of black magic.

Nola Robertson's paranormal investigator mystery novella, Deadly Demon Fire: Wicks Hollow Witches, Book 1, follows the intrepid witch whose spells go comically awry as she attempts to find the missing witches and prove herself in her uncle's eyes. Deadly Demon Fire is a treat for lovers of paranormal fiction, especially those who enjoy a bit of shifting in their characters. Alex is strong, capable and endlessly inventive -- perfect characteristics for an investigator, and her pedigree as a witch from an old family with elemental powers makes her an even better fit for the role of paranormal investigator. Mason, the ex-cop and Drake St. Clair's friend, who is seeking a change of environment from Florida, also just happens to be an alpha wolf-shifter. And yes, sparks do fly. This fast-paced, exciting and original paranormal thriller is grand fun to read. The characters are authentic, and the plot is first-rate. I'm looking forward to future installments in the Wick Hollow Witches series. Deadly Demon Fire is most highly recommended.