Falling Under the Mistletoe 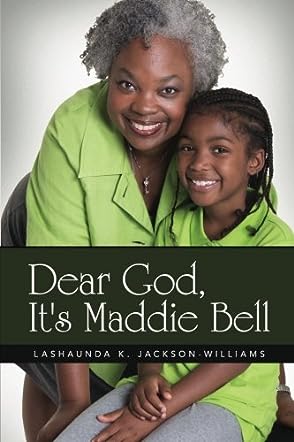 LaShaunda K. Jackson-Williams is a new Christian-Fiction author. Her interests include Urban Christian Fiction and Christian Fiction. Her writing comes from an authentic place as she was active in her family church growing up.

LaShaunda is presently working on three novels to be released this year. In her spare time, she loves reading and traveling.

Dear God, It's Maddie Bell by LaShaunda K. Jackson-Williams is a heart wrenching story about a ten-year-old girl named Maddie Bell. Maddie's grandmother, Bertha, dies and Maddie is left in the care of her Aunt Faye. She is quickly put into a foster home run by Ms. Carol and Mr. Louis. LaShaunda K. Jackson-Williams shows us a confident yet frightened child through her letters to God and her granny, letters that cry out for help and reveal events that are leading Maddie into danger. She gives each letter to Pastor Byrd to take to God. He puts the letters in a shoe box without reading them until Maddie tells him her last letter is urgent. Pastor Byrd reads the letter and realizes that she is in danger. Pastor Byrd and two mothers from the church go to Maddie's rescue and she is then placed in Mother Helen's care until her Aunt Deanne can come for her. Life with Aunt Deanne becomes complicated, but Maddie knows that her aunt will take care of and protect her.

LaShaunda K. Jackson-Williams' novella, Dear God, It's Maddie Bell, draws you in with the sweet and innocent letters written by a ten-year-old girl to her only friend, God. As Maddie waits for God's answer, her life goes from bad to worse. LaShaunda K. Jackson-Williams demonstrates the power of the faith of a child as we watch Maddie trust God in the sometimes frightening situations she encounters. Dear God, It's Maddie Bell is an endearing story that encourages us to reach out to those in crisis and to trust God with the simple faith of a child. A moving and well written story with well defined characters that will tug at your heartstrings.

I love what I've just read, I'm buying it for my granddaughter and maybe my great granddaughter. Great young girl's book. Thank you.