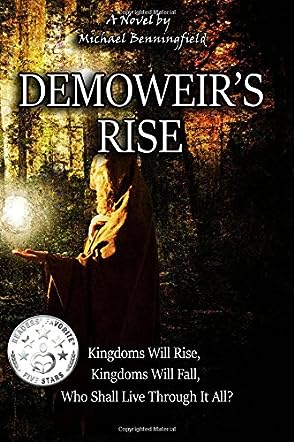 This is a continuation of Book One: Dwarf - and thus far, it is my personal favorite of the series.

A freshly original and delightful read, Demoweir's Rise by Michael Benningfield is the second book in the Great War Chronicles, a tale that features magical beings, great warriors, storm riders, ogres, giants, Cyclopes, elves, and a world that is strangely similar to the one created by J.R.R. Tolkien in Lord of the Rings. The peace of Umuosmar has been ruefully disrupted by the power struggle involving groups of beings and creatures. But there is more than just malicious groups fighting over Umuosmar, there is worse than the Cyclopes; yes, there is the “resurrection” of an evil, demonic woman operating as an elven goddess, and her rise could mean the complete subjugation of the land. Who can stop her and who can escape her might?

I love books that are set in worlds quite imaginary and different from our own, stories that transport me into other realms, into realities that are strangely familiar because they excite my imagination and remind me of something very basic and primitive about human nature - Michael Benningfield has succeeded in creating such a setting and such a story. This story may feature legendary characters like the elves and the Cyclopes, but it has powerful moral currents that reflect the politics and greed that are very noticeable in human society. I loved the heroes and the villains of this tale, and I was surprised by the fast-paced, intricate plot, the intense action, and the huge conflict. Demoweir's Rise features excellent prose and names that will always ring through the ears of readers like tingling poetic sounds. This is a story that is hugely entertaining, adventurous, and exciting in more ways than one, a perfectly satisfying fantasy.

The war is most definitely coming to the land of the dwarves and, with the ogres, giants and even the Skinder coming to lay waste to everything they hold dear, it’s up to them to do something about it. The Storm Riders may be the only hope that any of them have, and even these mighty and brave warriors will be pushed to their limits. In this battle that may decide the fate of the entire world, there’s no one that can do what Kragjaw and his family will do, even if they may be on both sides of the battle in Demoweir’s Rise by Michael Benningfield.

This book is an intriguing read and it’s full of action and adventure. There are creatures that you wouldn’t even imagine and each one of them is seeking their own ends. But which creatures will survive and which will fall when it comes to the final battle? Fogrolir and his grandson, as well as Sharp, Nanseen and more, are interesting characters that you definitely want to see succeed, but there’s a whole lot going on in here. I was never bored for a moment while I was reading and had to keep going to find out what would happen next. If you like a book that doesn’t have a dull moment and is full of action, then you’ll like this one. There’s plenty of it to go around and just the right amount of romance thrown in for good measure. After all, wars are won and lost on love all the time, especially in Demoweir’s Rise by Michael Benningfield.

Michael Benningfield’s Great War Chronicles continues with Book 2, Demoweir's Rise. Its predecessor, Dwarf, ends with the false elven goddess Demoweir’s awakening after she puts pieces of her soul back together and frees herself from her prison beneath the dwarven lands. Her servants, a group of Dark Elves and Cyclopses, arrive on the northeast shores of Megh Borim, as Demoweir is ready to take over the kingdom of Umuosmar. Now, a month has passed since their arrival, as the Storm Rider Fogrolir and his men keep a watchful eye on the beings from another land, just waiting for any signs of an attack.

In Dwarf, Benningfield filled his fantasy world with dwarves, dragons, elves, ogres, giants and the snake-like creatures, Reophuse. Now Cyclopses and skinders join the ranks of ethereal beings, as Benningfield once again shows his skill at world building in this second installment of the series. I find Demoweir's Rise has a slightly tighter and better-executed plot compared to Book 1. The clear cut prose and narrative in Book 2 provide easy reading just like its predecessor. All in all, this is another enjoyable and solid read from Benningfield. Demoweir's Rise is a fitting and must-read sequel for the Great War Chronicles, as it draws to even more intense and dangerous power struggles. There is more to come from this series as the ending suggested, no doubt some unpredictable turn of events will make the fan of the series eager again to see how the story continues.

In his first book, Dwarf, Michael Benningfield, in my own opinion, set the standard for what a modern day fantasy novel should be. From the very first book a pace was set at blinding speed in which so many things are happening at once that you would naturally think it is impossible to keep up with or decipher; and yet, Mr. Benningfield makes it look EASY!

Demoweir's Rise picks up right where Dwarf ended, and I don't want to give away any spoilers so you may not want to read beyond this as a few things may in fact spoil part of the book. Fogrolir, Vulred, Kragjaw, Kurikjaw, and a litany of others are all together and wondering what they are going to do in order to protect their kingdom. Praghock Yulgrunli is dead - his tyrannical reign has come to an end as the demon that possessed him has lost her hold on his soul. Sounds like a good thing, right? WRONG! In typical Benningfield fashion, we find that this causes more harm than good as the dwarves are now left to face an oncoming threat without a king!

Cyclopses, Dark Elves, and some rogue faction of miscreants called Skinder's have landed on the shores, and they have all sworn allegiance to the demonic goddess called Demoweir, and as the title of the book entails: they have come to ensure her rise to power. Not all is lost, however, as Fogrolir and company seek out the help of two dwarves that are battle-tested, battle-ready, and a handful to deal with! Mange and Barth, as they are named, are one of the freshest and funniest additions to any fantasy novel I have ever had the pleasure of reading. I found myself laughing hysterically aloud as I read the pages and pictured in my mind some of the things these two dwarves were famous for doing.

Never one to shy away from current events - Michael takes to task some modern day political arena's in his own unique way while keeping the story engaging. He mixes more than one world in this second book and somehow manages to keep everything on the straight and narrow where it is easily followed. I truly do not know what must go through his mind when he is writing. I do know this, from personal experience as a friend - he does not storyboard. Everything is done on a whim, straight from his mind. Yet, the story is tight-knit and fluid, and grips you and drags you into their world before you even realize what has happened.

Demoweir's Rise is undoubtedly my favorite book in this series. It showed a tremendous jump from a starting novelist to a seasoned writer in just five short months. The twists and turns are worth the read, and at one point the book made me shed a couple of tears, which is not something that happens often in fiction for me. The ending to the book, however, is the BEST PART!!!!!

Cannot wait for the third installment! If it is anything like these first two, you will have to hold on to your seat for yet another great thrill ride!