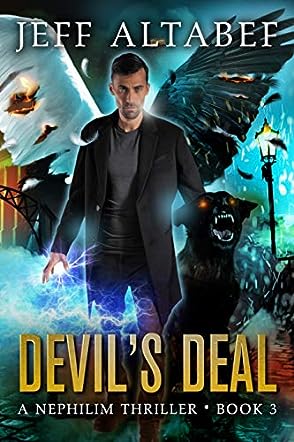 Having read and reviewed the previous book in Jeff Altabef’s Nephilim Series, Devil’s Dance, there was no way I would pass up book three, Devil’s Deal, and I snatched it up. Already a fan of Stephen, the halfling (part human, part fallen angel), I was determined to understand Stephen’s opening statement: “It turns out that hell and Lucifer aren’t what I imagined. That’s a good thing, although I’m still forced to make a deal with the Devil, one that might trigger the Apocalypse.” Stephen gets a message from his long-time best friend, Hank, about trouble in their hometown (Charleston)—a vampire might be killing kids. Stephen and Hank join forces and put everything on the line to figure out what happened and to shut down whoever is terrorizing his hometown. He suspects the mystery is tied to the End of Days and his untenable position between light and darkness.

A master strategist, wordsmith, and character developer, Jeff Altabef excels (again) with Devil's Deal. His imagination and presentation of characters that don’t quite fit their biblically-described personages are remarkable and thoroughly entertaining. Who’d-a-thunk the devil didn’t have horns, worn jeans, and walked around barefoot most of the time? How about a game of chess between God and his once most powerful archangel, Lucifer, to determine the fate of the world? Perhaps a female archangel that’s Lucifer’s favorite lieutenant and Stephen’s irresistible curse become your favorite scenes? My favorite scenes included the often funny, satirical, or ironic banter between Stephen and Hank as they faced one deadly situation after another. From action and adventure to supernatural and natural horror and violence, or great prose and imaginative scenes, there’s something here for you to applaud. I rave about the Nephilim series novels and Devil’s Deal has been the best, yet. I’m betting, though, that Altabef will top this in the next book; I can’t wait!

Devil's Deal: Nephilim Thriller Book 3 by Jeff Altabef is the story of a Nephilim, a half-human, half-angel, who fights against supernatural bad guys. The book is set in 2042 and this world is filled with all kinds of creatures, including vampires and ghosts. I have not read the first two books in the series, but there is enough information included in this book to catch me up on what is happening. There is plenty of action to keep a reader entertained and the author has created an interesting world. It kept me reading as I wanted to find out what happened next. I will take a look at the first two books in the series too. The dialogue was good and the story moves at a good pace.

Jeff Altabef has written an entertaining book in Devil's Deal. It would be in a similar vein as Jim Butcher's books and the main character is well written and has an interesting backstory. He wants to help people and he has the skills to do it, but I'm glad the author didn't choose to make him a vampire as that has been done to death. There are a lot of Nephilim books on the market, but a lot are featured in teen fiction and this book is directed at adults. I would recommend it to fans of urban fantasy and supernatural thrillers. A lot of books have female main characters nowadays. I liked having a male lead and I think it suited the story, plus the Nephilim are generally male.

Steven has always believed that monsters exist, and he is one of them. He is a Nephilim from a human mother and fathered by a dark angel. He has recently found himself in the eternal struggle between demons and angels. His unique heritage gives him great qualities: faster reflexes, enhanced strength, and an ability to heal quickly. Now a great war looms ahead, a war between angels and demons and Steven may have a very strong role to play in it. Making a vow to Father Paul to be on the side of light over darkness places him a situation of conflict, stronger than anything he could have imagined. Father Paul keeps his side of the bargain by keeping Kate and his daughter safe, but making a deal with the devil might have devastating consequences. Can Steven choose light over his darker nature when the moment arrives? The slightest mistake in making a deal with the devil can bring about the apocalypse.

In Devil’s Deal, the third book in the Nephilim Thriller series, Jeff Altabef crafts a fascinating story that, while exploring supernatural characters, compels readers to think about their darker natures. It features the proverbial struggle between light and darkness, between good and evil. The conflict is developed at multiple levels. The protagonist, Steven, is a hybrid creature and his humanity, inclined to follow the light, struggles with the part of him that is spiritual. How can a monster choose to be good? This is the fundamental question that moves the story forward.

The story is told in the first-person and from the point of view of the protagonist who pulls readers into his worldview, allowing them to experience his emotions. There are different layers of conflict and readers will want to follow the protagonist and his partner Hank as they struggle to protect people from dark forces, like a monster that kills kids in Charleston. This is an engrossing novel, fast-paced and filled with focused scenes. Devil’s Deal caught my attention from the very first page and I couldn’t stop reading until the final page. It also reads well as a standalone novel.