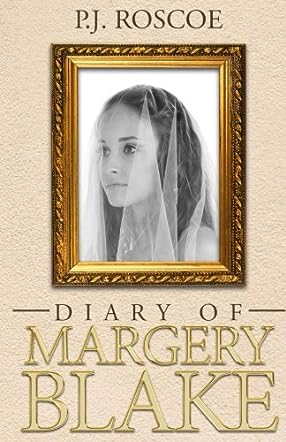 I wrote this book because I felt drawn to do it. it was a strange sensation. An idea that refused to go away. A purely historical novel, which is slightly out of my usual writing as I generally combine supernatural with historical.
I wanted to show how women were treated by society and men and what I found shocked me, as I see how women still give their own power away to men. The suffragettes fought so hard and for so long. many sacrifices were made and yet, women still allow themselves to be used like sexual objects by a male dominated world. It cannot continue, so, I also give talks titled, A Woman's Voice' on how it was, how it changed, and how it still is.
We are equal to men, not beneath them.

If you’re a modern woman reading Diary of Margery Blake by PJ Roscoe, don’t be surprised if you cringe at what you read in Margery’s diary. Even though this is fiction, it’s based on historical facts, especially on society’s attitudes towards females in the 19th century. No matter what is happening with equality and sexual harassment issues today, you might just find yourself feeling lucky to be living now instead of then. For starters, if you were of marrying age, there was little comfort in being born into the upper class if you didn’t get to choose your future husband. In Margery’s case, her parents had decided that a marriage between her and their friend’s son, the handsome Captain John Harrison, was an ideal arrangement, and both sets of parents worked to bring this union about. There was little regard for either the bride’s or the groom’s preferences in a mate: the important thing was producing offspring, preferably males, to carry on the family names.

When we meet Margery through her diary, she is most unhappy, knowing that her future means being the wife of a man not of her own choosing. Once married, Margery’s unhappiness accelerates rapidly as her body is ravaged sexually and brutally by her husband on the wedding night and for months afterward. As much as it is about lust for him, it’s more about making her pregnant, and when Margery miscarries, both families see the loss as all her fault. When she tries to tell her mother what she is enduring at the hands of her husband, her mother turns a deaf ear. After all, it’s a woman’s lot in life to fulfill her sexual duty to her husband: she is his property; he can do with her whatever he wants. Sadly, even today, some men still look at women that way.

PJ Roscoe’s method of using a diary to enlighten readers about such attitudes and how it would have affected a nice young woman stuck in a loveless marriage, not of her own choosing, is very clever. We feel Margery’s pain and loathing for her husband even more acutely than if this were told using a conventional novel style. Surprisingly, as the story moves along, it becomes a true page turner, with twists we don’t see coming, even right up to the very end. Despite occasional verb/tense issues, it’s little wonder that Diary of Margery Blake is the 2017 Winner of the Marie M Irvine Literary Excellence Award for Historical Fiction. That recognition is well-deserved. Bravo!