Growing Up at Work 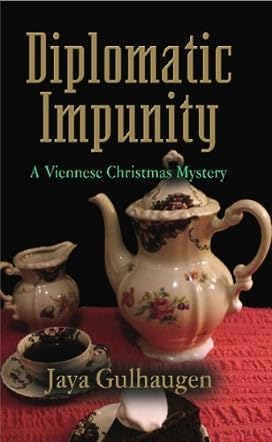 Vienna in 1956 is at the heart of the Cold War era of espionage, mysterious events, and unexplained deaths. It was not a safe world anywhere, but Vienna, just recently granted perpetual neutrality, has become a hot spot for all kinds of James Bond-style intrigue. And Peggy Gilman is dragged into the heart of it all. Her husband, Jim, is a CIA operative, and the family has become an intricate part of the American Embassy network. While Peggy volunteers to assist homeless refugees, Jim does what spies do. There are Russian spies everywhere and no one really knows who they can trust, even amongst their colleagues at the Embassy. Then, amidst the fun and excitement of Christmas, one of these colleagues drops to his death in the grand foyer of the villa during Peggy’s Christmas party, and the mystery and intrigue intensify. Peggy takes on the role of amateur sleuth and uncovers a maze of hidden secrets in a country and time when no one and nothing is as it appears to be.

Jaya Gulhaugen’s mystery, Diplomatic Impunity: A Viennese Christmas Mystery, is a dramatic web of mystery during the very troubling era of the Cold War. The plot follows Peggy’s entry into Viennese events, as she ushers her children around during the pre-Christmas excitement. The characters are well developed, the descriptive narrative places the reader right into the scenes, and the dialogue moves the story along. In spite of the aura of calm, the author has instilled an underlying fabric of unease. This is, after all, the Cold War and the reader has the sense of being on the set of a spy thriller with mysterious, presumably Russian, spies on every corner. The reader is jolted out of the reverie of peace and calm preparations for Christmas with the sudden shocking and mysterious death. The reader witnesses a role change in Peggy as she bears the mantle of amateur sleuth, Agatha Christie-style, and is suddenly very intent on solving it since no one else seems to be so inclined. Or, perhaps it’s because of all the secrets everyone is hiding. Even Jim holds something back. There is a lot of suspense and drama as the plot thickens, but will the mystery ever be resolved? This is a thrilling mystery suspense novel set in the Cold War era. A real page-turner.