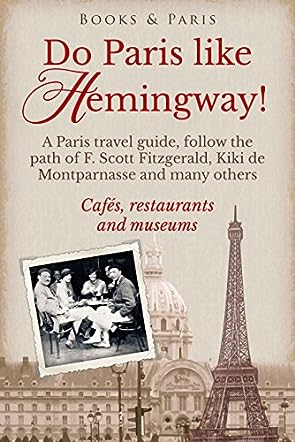 Do Paris Like Hemingway! is a non-fiction travel guide written by Lena Strand. In her preface, the author discusses how she got the inspiration for writing this book. It began as she was watching Woody Allen's film, Midnight in Paris, wherein a time traveling character meets up with Hemingway, Picasso, and other famous authors, performers, and artists who lived in Paris in the early twentieth century. She began to wonder about their haunts, the places they used to frequent during their Parisian phase. To her surprise, many of those places were still in existence: hotels, cafes, restaurants and bars, and for the price of a drink or meal, a visitor to France can imagine themselves in a time gone by watching Josephine Baker or overhearing a heated discussion between Cubists and Fauves.

Lena Strand's non-fiction travel guide, Do Paris Like Hemingway!, is a fascinating and meticulously researched guide to the Parisian arts and letters scene that begins with an historical look at the evolution of the Paris cafe in the late 17th century and continues into the twentieth century. The first part of her guide, which covers The Belle Epoque, from 1871 through 1914, just before the First World War, includes a photograph that instantly had my imagination taking flight. It showed Mosie Kissling, Paquerette, and Pablo Picasso at Cafe de La Rotonde, and was taken in 1916 by Jean Cocteau. I couldn't take my eyes off this picture, especially the image of Picasso as a young man -- with hair. Then I read again the name of the photographer and, somehow, Strand had cast a spell over me as I studied that picture and the other marvelous photos she unearthed, and read on about the people and places that have loomed so large in my imagination.

And while some places are more tourist-oriented now, there are still cafes and bars around that have appeal to today's artists and writers. Got a cultural vacation on your bucket list? Grab a Paris map and a copy of this book, and start planning the adventure of a lifetime. Do Paris Like Hemingway! is most highly recommended.

Do Paris Like Hemingway by Lena Strand is a guide to Paris' historic artistic haunts. Oscar Wilde, Van Gogh, F. Scott Fitzgerald, Picasso, Renoir, and – of course — Hemingway, along with a long list of other artists, are all represented as Strand takes us back in time without having to leave the Paris of today. Restaurants, hotels, cafes, and shops where iconic artists ate, socialized, shopped, laid their heads, and even passed away are featured. Along with the locations themselves, Strand provides interesting and informative descriptions of these encounters, presented next to photos and factual tidbits. The book is organized by locale as opposed to artist, making it wonderfully easy to flip through to find a hotel or a place to eat by chapter. It also has a compiled list of places to view art, and, as one might imagine, there's no shortage of those in Paris.

This is a travel guide for the art groupie, and perfect for anyone who is passionate about the art scene of yesteryear. I'm reminded of those who follow their favourite rock band around on tour, and could absolutely see myself spending a week in Paris – as a devotee of classic writers and painters — with Lena Strand's Do Paris Like Hemingway clutched in my hand. I have had lunch in the Cafe de la Paix, without having any clue that Hemingway had a Christmas Eve dinner there and had to rush out and back because he didn't have enough to pay the bill. I would recommend this book for any travel or art enthusiast, and probably even those who aren't, as this little compilation is fun to simply flip through, immersing yourself in the past with amusing details of those who helped shape our world today.

Paris, the city of lights, the city of passion and art, theatre and literature. Any art connoisseur or art historian has an embedded fascination with this very international city. Indeed, at one time it really was considered the centre of the art world, perhaps even the universe. A visit to Paris wouldn’t be complete without a visit to the Musée du Louvre or some of the former homes of famous painters and sculptors like Delacroix and Rodin. But there are many other fascinating locales that were once, and still are, frequented by the creative minds of the times: like the Café de la Paix on Place de l’Opéra where Hadley and Hemingway met in 1921, or Le Dôme on Boulevard de Montparnasse, a favorite place for Trotsky and Lenin, not to mention Picasso, Modigliani and others. And then there’s the hotels, where the creative minds lived for weeks or months. Some of these hotels were once mere hovels and have now been turned into posh establishments, leaning on their famous visitors of the past to attract paying guests.

There is a lot to see in Paris and there are many interesting guide books to help the visitor see as much as they can during their stay. Lena Strand’s Do Paris Like Hemingway! presents the city from an artist’s/writer’s perspective, zeroing in on interesting venues the great creative minds in history once frequented. This short book is well documented with a little bit of history, a little bit of art/literary history, and a whole lot of interesting tidbits. This is definitely a guide book with a difference. From the romantic cafés to the historic hotels, and on to to the countless museums and interesting sites of artistic interest, this book has it all. A very useful tool/guide to the arts and to any literary enthusiast on a jaunt to Paris.

Do Paris Like Hemingway! A Paris Travel Guide by Lena Strand is a history and travel buff’s dream, as fascinating and useful as it is educational. Lena Strand, initially inspired by Woody Allen’s film Midnight in Paris, has deftly crafted a travel guide to assist the curious in trying to recapture the opulent and eclectic flavors of Paris from the Belle Epoque (end of the Nineteenth Century) and the Roaring Twenties, when the Jazz Age was in full swing and luminaries like Josephine Baker electrified Parisian society, through the Post-World War II Existentialist Movement.

Strand’s narrative in Do Paris Like Hemingway! is conversational and familiar, resulting in a guide that is both user-friendly for those with their feet on the ground in Paris, and appealing to armchair travelers seeking Parisian flavor in the comfort of their own homes. The text is handily organized into chapters about The Belle Epoque, the Jazz Age, and The Existentialist Movement, with notes about cafés, salons, and restaurants inserted in the appropriate sections, along with menu notes, prices, and useful tips for securing reservations, peak visiting hours, cost, etc. Separate sections deal with hotels and museums frequented by Paris luminaries in ages past and particulars about extant décor and architecture ready to transport visitors back to a gilded age. Along the way, historical photographs of the various Paris legends mentioned in the narrative are perfectly placed for maximum relevance and interest.

Do Paris Like Hemingway! by Lena Strand is a must-read for anyone wishing to discover the true romance of Paris. Through Strand’s keen eye and impeccable scholarship, time travel and the eternal magic of Paris through the ages are accessible simply by turning the pages.

Lena Strand will take you on a unique, delightful tour of Paris in her nonfictional work, Do Paris Like Hemingway! A Paris Travel Guide. Ms. Strand focuses on the famous café culture that spanned from the 17th through the 20th centuries. She explains how cafés were the center of society, where artists, writers and intellectuals met frequently and exchanged creative thoughts. These historical buildings are still part of Paris life – some retain (or have been restored to) their original décor; other buildings have been redesigned for other purposes. Not only does she describe beautiful decors and scrumptious menus, she includes names of famous people who spent hours there, and short stories of happenings within the walls. Interesting photographs of these people are sprinkled throughout the book.

For anyone who plans to visit Paris, or is simply interested in the Parisian café culture, Lena Strand’s Do Paris Like Hemingway! A Paris Travel Guide is a wonderful book. While it is a modern day travel guide, it is also a glimpse into the artistic and philosophical side of Paris. The author describes this cultural phenomenon in a succinct manner, making it easy to understand how it developed and what aspects still exist today. By including other points of interest, such as current art galleries and historic hotels, a tourist could experience the full gamut of this culture. Ms. Strand has presented a great amount of practical material in an organized manner. The table of contents at the beginning and the list of places at the end would assist a traveler in finding information when needed. A fascinating read!