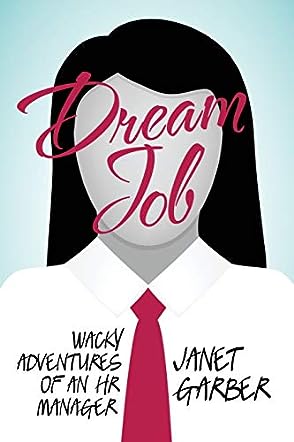 Writing is the best revenge! And so much fun when you can massage the facts a bit and make everything even more outrageous and fun. Though I write everything from horror to book and movie reviews/articles/essays/creative nonfiction, and once even erotica, I'm proudest of my award-winning novel and eagerly await publication of my 2nd novel in 2023. A high: when a reader connects and I can see they really "get" me.

Dream Job by Janet Garber is about a solitary, zany, quick-witted woman who recently celebrated her birthday, one year shy of forty, and is hanging on by a thread. The metro is Melie’s mode of transport to and from her job at the Medical Center Employment Office. She has experienced a personal drought for the past few years but has a lively imagination and has built a fantasy around a secret crush, whom she looks forward to seeing on the platform and while riding the metro. She has no friends outside the office and considers her team at work to be her friends, except for her fire-breathing, fault-finding boss. Sometimes she cannot wait for her dreams to spring to life. Then there are days when she wishes she owned an invisibility cloak, which she could wear until the storm passes. Melie is haunted by her ‘One Big Secret’. The anxiety she feels increases during a medical exam when the doctor discovers a lump. The walls start closing in, and Melie feels as if she is falling down a rabbit hole. To compound it all, she has to compete for affection from her new beau. Then her boss has a disaster with a cabinet and its contents. Yet, it’s just another day at the office as Melie has to deal with a rat, office politics, and raunchy, aggressive, and melancholy doctors.

Dream Job by Janet Garber is an enjoyable, clever, and humorous read about a single female, Melie, who recently celebrated her thirty-ninth birthday. She travels to and from the office using the metro, which should be dull and unadventurous but turns out to be a roller coaster ride due to her absurd imagination. She is haunted by her ‘big secret’, has colleagues whom she naively regards as friends and a dragon of a boss who is domineering and keeps the office on its toes. At one point I was so caught up in Melie’s bizarre antics that I almost lost track of how she quietly deals with her building anxiety and has no none she can trust with her medical diagnosis. From the moment she steps into the office, she is confronted with problems that she is paid to solve. I enjoyed the author’s witty use of chaos as the story unfolded in a tap dance across the pages. I found myself rooting for Melie, even when she did behave like a ‘nut.’ She pushes forward as she tries to solve the puzzle of her existence and her string of failed relationships. She is forced to move boundaries and go beyond her comfort zone. As her life falls to pieces, she is reborn. Fans of romantic comedy will love this enjoyable book.

http://www.sdjewishworld.com/2017/04/30/the-perils-of-an-hr-manager/ by Donald H. Harrison
Thank you so much for sharing a copy of DJ with me. I loved it! You have an amazing talent, to craft such an engaging, fast-paced, concise, and fun story!! Jennifer Loftus, Astron Solutions
5.0 out of 5 stars A wonderful, entertaining read
By David Z on April 19, 2018
Format: Kindle Edition
This is a wild and wacky book all right, and it’s a blast. From the moment we meet Melie, she’s mired in HR insanity and an existential crisis of romantic desperation: “Men seem to want something she just couldn’t give. They drifted in and out, leaving more rusted wreckage in her dump of a heart.”
Matching the story perfectly is Garber’s writing style, which is the linguistic equivalent of a New York City attitude. The sentences come at you as brisk, overlapping waves, hurling you across the story. The book is filled with vibrant characters, and why not? We’ve all worked with these people. And I must say, they are much more fun as someone else’s problem.
My favorite character was Ted, possibly the least likely romantic lead in modern literature. I shall say no more, just read it for yourself. And not to get into plot points, but I did feel it appropriate that Melie would finally make some healthy choices only as she reached the pinnacle of her meltdown. Yep, been there. A wonderful, entertaining read.
davidzhirsch@comcast.net