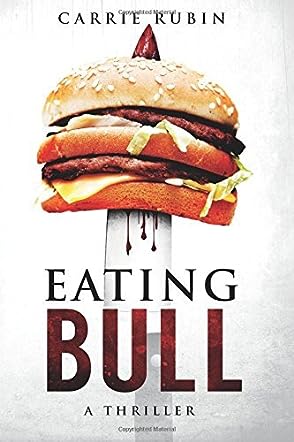 Carrie Rubin is a physician with a master’s degree in public health. She believes every experience is worthwhile, even if our paths deviate from where we started. In addition to writing medical thrillers, she maintains a blog at www.carrierubin.com. She lives in Ohio with her husband and two sons. Other works include The Seneca Scourge (2012).

In Eating Bull by Carrie Rubin, Jeremy, an obese fatherless teenager, is struggling emotionally as well as physically. The story is partly about his going through counseling to gain control of his overeating, and his mother’s attempts to help him, despite other negative influences in their home. Unfortunately, Jeremy is also the subject of ridicule and bullying at school. He is reputed to be part Native American, so his nickname Eating Bull is a reference to that as a play on words of the name Sitting Bull, a famous Native American. At heart, Jeremy is a sweet and likeable character and you want him to succeed and be a winner at life. But at the same time, a maniac serial killer is targeting overweight people as a message to America that they need to control their self-indulgence. Will his path cross with Jeremy’s? There are many tense moments and some short, graphic violent passages which could be disturbing to some readers.

Eating Bull by Carrie Rubin was a surprise and a delight. I am interested in nutrition and the thought of a novel about it was intriguing to me. What a treat — it is so much more. In addition to the two main stories weaving together through Eating Bull, there is some good behavioral psychology to help the reader analyze their own eating patterns. My interest was sparked when I learned a few things about why people overeat and how to gain control over that pattern. Eating Bull will help people as well as entertain them with a great story.

In Eating Bull by Carrie Rubin, poor obese Jeremy thought his life would finally take a turn for the better when a nurse sues the food industry for him. The world is watching the curious, lonely boy who has become a "victim" of the food culture. But now Jeremy is at risk of becoming a real victim of murder, thanks to a psycho who is targeting the overweight. And with Jeremy as the poster boy for his size, the killer will stop at nothing to get him and his nurse too.

How creative and unique is this plot! I can honestly say without a doubt that I have never read anything like this before. Carrie Rubin has taken the classic murder mystery thriller and brought it into the modern day world, tackling a very disturbing and relevant issue while bringing us along on an edge of your seat ride with Jeremy. But Eating Bull is not a one-trick pony. The one of a kind plot is accompanied by beautiful character depth and background writing. I could honestly envision Jeremy as a real person, and his nurse as well. And even though it takes moments to talk about Jeremy's condition, I never felt the story dipped into boredom. Carrie Rubin is a very talented writer and I can't wait to read what she thinks of next. The only reason this isn't a giant five out of five is because I think some of Jeremy's language seems beyond his years, something that happens when adults write teen parts. But this was a blast to read and I highly recommend it!