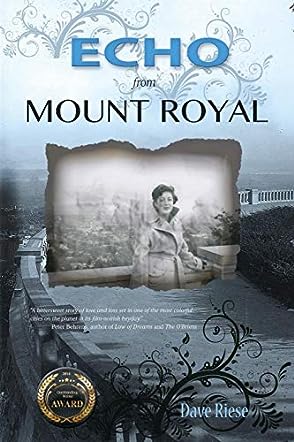 Born in 1946, Dave Riese grew up in Arlington, Massachusetts, graduating from Arlington High School in 1964. He attended Bates College in Lewiston, Maine, majoring in English literature. During his junior year, he studied English Literature at Oxford University.

After graduating in 1968, Riese enlisted in the Air Force one step ahead of his draft board's invitation to join the army. He was station in the Philippines at Clark AB and at Andrews Air Force Base outside Washington D.C.

Discharged from the military in 1972, he attended Boston University on the GI Bill for a Master's degree in Broadcast Journalism. The following summer he was hired by the University of New Hampshire to script and film videotapes about government social programs for the elderly.

His videotape grant ran out in 1976, but luckily at that time, companies were eager to hire people for their IT departments. With no computer experience, Riese was hired by Liberty Mutual Insurance. He learned later that the reason he was hired was his writing and communications background. He says, "This goes to show you that an English degree is a valuable asset!"

During his 35 years in information technology, the industry evolved from mainframes to personal computers using the internet. He retired from Massachusetts Financial Services in spring of 2012.

He and his wife moved north of Boston in 1974. Their daughter lives in Ireland with her husband. Their son and his wife are pediatricians in Rhode Island. They have four grandchildren.

There is a story behind every photograph, especially a photograph of a lovely young girl standing on top of Mount Royal. Pierre knows this. He was part of the search and rescue team who searched the crash site of a passenger plane. That's where he found the photograph. He thought he recognized the young girl, but it didn't come back to him right away. Searching the passenger list of the downed plane, Pierre is able to deduce the identity of the girl, someone he met years ago at his family's cottage, someone who at the time was engaged to a friend of his, one of the passengers on the doomed plane.

Echo from Mount Royal is a tragedy. It's Rebecca's story; she's the young girl in the photograph. She doesn't know about the photograph's discovery and it's not until her grandson leads her through the confusing channels of the internet that she unravels a past that she would have wished to leave in the past. It's a love story, a poignant reminder of the fragility of life and how the pattern of one's life can change dramatically in just a blink of an eye. For Rebecca, this dramatic change was almost her undoing, as she came to realize that, "One cannot escape life. Whatever happens, one must endure."

Author Dave Riese has written a very moving romantic tragedy. His story begins almost like a memoir, a creative nonfiction story about a real person's life. Two stories overlap; Pierre, the search and rescuer who discovered the photograph in the wreckage of a passenger plane, and Rebecca, the romantic young girl who innocently treads a path towards heartbreak. The story is well paced as it grips the reader right from the beginning. A well crafted story.