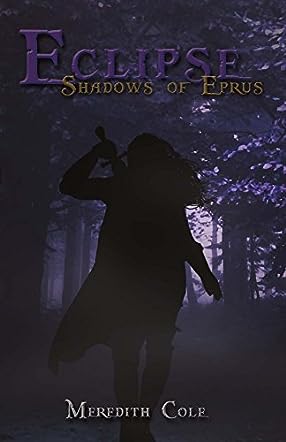 Meredith Cole is a sixteen year old highschool graduate and Christian Author. Eclipse is her first book in the Trilogy Elites... In her spare time, she mentors aspiring young writers for free and helps out around her home, where she lives with her nine other siblings.

Nyla, a 16-year-old girl orphaned as an infant, was raised and trained by the school for Elites to join their ranks when she graduated. However, when Nyla failed her graduation test, they cast her out into an unfamiliar world. Alone and trying to fend for herself during the cold winter months, Nyla decides to stay in Wyndamere, a village located far away from the place she called home for most of her life. Rather than finding a new place to call home, Nyla makes a discovery that forces her to flee the village and confront her past.

Eclipse: Shadows of Eprus by Meredith Cole is a unique Christian high fantasy narrated by three different protagonists; Nyla and her friends from the Elite school, Kieran and Soren. As with most high fantasy novels, the setting was detailed and rich without being long and drawn out. I thought it was a good balance between staying true to the genre and appealing to young adult readers. There were moments when I felt frustrated by the timing of the transitions between the different perspectives because they occurred frequently in the plot; however, the transitions were smooth and seemed to fit the events that were taking place.

I particularly enjoyed the attention Cole gave to Nyla's history; it provided me with enough information about Nyla without spoiling some of the twists Cole added to the plot. Eclipse: Shadows of Eprus by Meredith Cole is sure to appeal to both young adult and older readers, and I am looking forward to what Cole has in store for the next two novels in the trilogy!