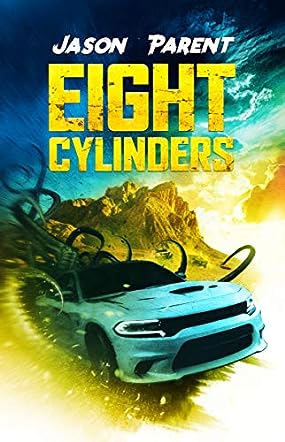 Jason Parent’s novella Eight Cylinders is an exciting and entertaining blend of action and the supernatural. The author throws you into the midst of furious action before you have time to so much as buckle your seat belt. When we meet the protagonist, Sebastian “Seb” McCallister, he and his partner and fellow thief, Carlo, are pinned down under fire from a murderous drug dealer and his gang, after a deal to move some stolen jewelry goes sour. Although Carlos is killed in the shoot-out, Seb escapes in his stolen car, a souped-up Dodge Charger Hellcat, but not before being shot in the stomach. He seemingly falls unconscious while driving, and wakes up in a ramshackle settlement populated by some extremely unsavory characters and located in the middle of nowhere. Along with them, Seb is trapped in this desolate valley by giant flesh-eating monsters hiding in the hills surrounding the settlement. Seb urges them to attempt an escape with him, and eventually, they agree. From here, the action shifts into high gear. I won’t spoil it with any details, but suffice to say, you will not be bored.

Eight Cylinders is exciting enough to make you want to read on without stopping for explanations, which is good because these are in short supply. There are a number of mysterious supernatural goings-on, including ghosts, time slippage, and in general, a sort of eerie, Twilight Zone feeling that hovers over everything and there is plenty of well-written action. Although we don’t learn much about the main character, Seb, and still less about the others, we don’t expect more from an action story that is only novella length. Every other consideration is sacrificed to keeping the plot moving forward at an ever-accelerating pace, and this is what makes it work. I can heartily recommend Eight Cylinders to anyone looking for a thrill ride of a story. Warning: graphic violence, and bad language.