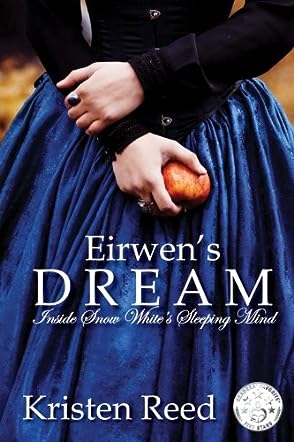 Kristen Reed, a graduate of the University of Texas at Dallas, is an artist, filmmaker, and author from Dallas, Texas. As a Christian, her faith heavily influences her writing and is the driving force in her life. She is the author of The Fairetellings Series, The Alazne Series, and The Way of Escape.

For those younger readers and their parents looking for a clean fantasy story based on Christian philosophy, Kristen Reed offers Eirwen’s Dream: Inside Snow White’s Sleeping Mind. Based loosely on the traditional fairytale of Snow White, Eirwen is to assume the throne upon the death of her father. Young, beautiful, and in love with Prince Roderick, she expects great things to come. But when her stepmother, Nerys, who is concerned there will no longer be a place for her, poisons Eirwen, she “awakens” in a faraway land, Edwig. There, Lawen befriends her. Together the two surmise that Eirwen may be the one awaited in Edwig — the one prophecy identifies her as Snow White (which happens to be Eirwen’s parents’ childhood nickname for her as well.) As trouble unfolds in the form of an evil Siren who kills beautiful young women to maintain her beauty and power, Eirwen, Lawen, and their newfound friends, seek to outfit Eirwen with the armor she will require to defeat the evil Siren and her reapers.

There is a growing desire for Christian fantasy reads and the rules for the genre seem to be changing. In the case of Eirwen’s Dream, Kristen Reed pushes the boundaries a bit in that she is not telling a story only of faith and redemption. Rather, she is portraying through Eirwen’s journey a series of principles that a believer endeavors to follow. When Eirwen masters each of them, she is provided with one of the elements of the armor of God (i.e, the “shield of faith,” the “helmet of salvation,” the “breastplate of righteousness,” and so forth). This story is unapologetically Christian in nature, including references to the Bible, to Jesus Christ, and to forgiveness and salvation. Thus, it hits all the points necessary for those looking for a story set in a fantasy world, with unreal creatures and elements of “magic,” while also promoting the Christian faith. Sure to be enjoyed by late-middle grade readers and up, Eirwen’s Dream is a well-written page-turner.

Eirwen's Dream: Inside Snow White's Sleeping Mind: Fairetellings, Book 2 is a Christian fantasy novel written by Kristen Reed. Princess Eirwen did not have her heart in the preparations the Prime Minister was discussing for her upcoming coronation. Her father, King Rhys of Talfryn, had died only recently, and she still grieved over her loss. She was also distracted, albeit quite pleasantly, by the presence of her fiance, Prince Roderick. He seemed the perfect husband-to-be. He loved playing with her little half-brother, and he was a kind and brave man. Her step-mother was of a different mind, however. Nerys was consumed with hatred and envy of her step-daughter. She had hoped to get King Rhys to change his will, leaving the kingdom to her son, Ifan, with her in control as regent, but he had died sooner than she expected. Now, her looks fading rapidly, she had only seeing her step-daughter elevated above her to look forward to. But did she? Perhaps she could change the destinies of her and her son. Perhaps if Princess Eirwen were dead?

Kristen Reed’s Christian epic fantasy novel, Eirwen's Dream: Inside Snow White's Sleeping Mind, is an inspiring and entertaining retelling of the Snow White fairy tale. Although this is the second book in Reed's Fairetellings series, the author includes enough background to allow it to be read on its own. After Princess Eirwen falls into a deep sleep after being poisoned, she finds herself in an alternative world where she alone can save the realm from an evil Siren. Along the way, she learns what it means to be a fair, just, and merciful ruler. This is a well-written and compelling tale as the young princess goes on her own quest and comes out much the better for it. Eirwen’s faith plays a major role in who she is and how she conducts herself, and the role forgiveness plays in her world view is very admirable. I enjoyed reading Eirwen’s Dream. It’s most highly recommended.

Eirwen's Dream by Kristen Reed is a quick fantasy read with a creative plot line that is entertaining for the most part. Eirwen, the princess and daughter of the late king, is not only heir to the throne, but also engaged to the kind and gallant Roderick. Eirwen is saddened by her father's passing, but she's happy she's engaged to a good guy. The one thing that can dampen her spirits at the moment is her strained relationship with her stepmother, Nerys, who's not exactly fond of the princess. On the night before her coronation, Eirwen falls ill during dinner and goes to bed to rest. She wakes up the next day in the middle of the forest in a strange land that is suffering under the rule of an evil Siren who takes young girls to feed her power. Eirwen not only has to find her way back home, but also has to save this land from the Siren.

Eirwen's Dream is a light, enjoyable fantasy. I liked the plot of this fairytale retelling; it was actually creative and interesting. Some parts felt a bit lacking in that some of the twists and resolutions felt too easy and I thought some of the characters could have been fleshed out more, but this is a short novel so I can understand there may be limitations. But, overall, Eirwen's Dream is an interesting re-imagining of the classic fairytale. If you like light, easy, and quick fantasy reads, you will enjoy this one.