Elfs in a Conquered Realm 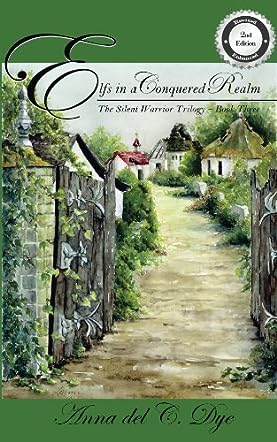 Elfs in a Conquered Realm by Anna Del C. Dye is an impressive tome amongst her collection of stories from the Elf world. Elfs in a Conquered Realm covers many years, and reintroduces some of the characters from Dye’s prior works. The epilogue covers centuries, filling us in on happenings yet to come, and leaving us with that feeling of satisfaction that comes when you realize everything is going to turn out just fine. Dye’s elfs are so authentically described and characterized it is hard to disbelieve they really exist somewhere. Their emotions, concerns, worries, even the ennui of their daily lives could not be more faithfully expressed for the reader. Anna Del C. Dye knows elfs. Any author, anywhere, who might consider writing a book which includes elfs, would do well to solicit her advice and pick her brains, for she has demonstrated a depth of knowledge that places her among Earth’s most prominent experts on the life of elfs.

Elfs in a Conquered Realm is, of necessity, a large volume, approaching 600 pages. There are so many different characters – both human and elf – in this story that it literally requires a play-list to keep track of who is who. Fortunately, Anna had the wisdom to include that very thing at the beginning of the book. All the major characters’ names are listed, along with a pronunciation guide and a description of whom or what they are. The inclusion of this information is an invaluable aid to readers, because without it, it would be very difficult to keep track of the players. There is no way to adequately tell you everything about a 600 page book in just a few hundred words, so I will not attempt to do so. Briefly I will say the two kingdoms – human and elf – come together in cooperation to accomplish much between the covers of this book. Young people of both races fall in love, get married, and have children. Battles are fought and won, cities are rebuilt, legends are created, and countless lifelong friendships are formed. In many respects, Elfs in a Conquered Realm describes a Utopian society one can only dream of. I strongly recommend you read Elfs in a Conquered Realm for yourself; my attempt to provide a “review” of it is a pitiful one indeed. You need to read this wonderful story for yourself. You will be happy that you did.