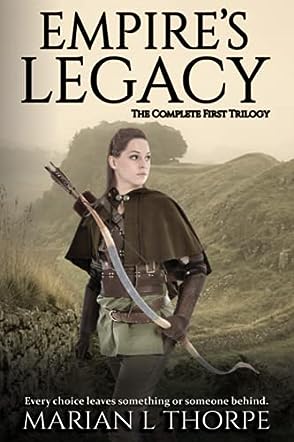 Marian L. Thorpe's Empire's Legacy: The Complete Trilogy is a fantasy epic set in a unique and highly imaginative world, drawing on the history, cultures, and languages of Britain, Scotland, Ireland, Scandinavia, the Baltics, and the Roman Empire. The three novels in Empire's Legacy are Empire’s Daughter, Empire’s Hostage, and Empire’s Exile. The narrator in the trilogy is Lena, the principal character. In Empire's Daughter, Lena, 17, is a fisherwoman of Tirvan, a coastal village of the Empire. For two hundred years the Empire's men and women have lived according to the Partition Agreement. The women are responsible for running the villages, and the men are responsible for the Empire's defense. When Emperor Callan asks the women to break with this tradition to fight an invasion by the Leste Kingdom, Lena and other women learn the skills and tactics to fight and successfully defend their villages. In Empire's Hostage, in another break with tradition, Lena becomes a Guardswoman in the Empire's army. To ensure the terms of a peace treaty, Lena is sent as a hostage to Linrathe. She is kidnapped by King Fritjof of the Marai. She and Cillian, a Linrathe scholar and teacher, escape. According to the terms of the treaty, they are charged with treason and are exiled. Empire's Exile begins with Lena and Cillian's trek through the Durrains, mountains in the ancient Eastern Empire. Their exile ends, to be replaced with a formidable mission from Emperor Callan. The Empire is on the verge of falling. General Turlo, Lena, and Cillian are to search for the Eastern Empire. If it still exists, would it help the Western Empire?

From the very beginning, I was captivated by Marian L. Thorpe's Empire's Legacy, a magnificent fantasy epic. I particularly liked the character development of its remarkable and courageous principal character, Lena. I think Lena's break with traditions conveyed in a powerful and very expressive way the need to change the Partition Agreement, to let women and men choose their own way of life. I loved the vivid and evocative details of the Empire and the other lands. I felt the narrative, the dialogues, the inventive and different languages, the lives of teachers, historians, scholars, keepers of songs and stories added great depth to the saga. I liked how Lena's abilities and skills as a fisherwoman, her ability to read and write, her horsemanship, and soldiering skills are interwoven into the story. Lena keeps a journal and I loved the way Lena's inner journey is revealed through her thoughts. I felt the trek through the rugged Durrains provides a fitting backdrop of space and solitude to the growing love between Lena and Cillian. Each has a painful and complicated personal story, and I liked the way this unfolds in Empire's Exile. Although the historians Colm of the Empire and Perras of Linrathe appear all too briefly in the trilogy, I was intrigued by their personal stories. A very enjoyable and well-crafted fantasy epic of Lena, an extraordinary young woman, taking on the challenges of her life in changing times.