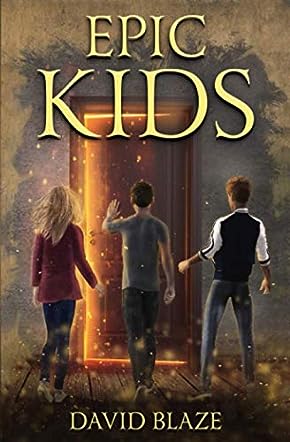 David Blaze is the award-winning author of several highly imaginative children's books, including the popular My Fox series. His goal is to create children's books that are fun, hilarious, and honest for kids of all ages and from all backgrounds. Timothy David and his son Zander Blaze live in Orlando, Florida with their crazy dog (Sapphire) and Blaze's awesome Mom! Timothy David loves to watch funny movies and eat pizza rolls! Zander Blaze loves to play with Hot Wheels and feast on chicken nuggets! Together, as David Blaze, they share lots of laughs and have lots of fun.

Epic Kids is an action and adventure fantasy for children and preteens written by David Blaze. Jake had a lot of trouble believing that the cool kids were actually inviting him to join them at their table in the cafeteria. Him? Really? His table-mate from the not-so-cool table he usually sat at confirmed his misgivings. No, he really wasn’t cool, but then why were they waving at him and waiting for him to join them? Jake was used to being basically a non-entity at school. His grades were nothing exceptional, and his sports ability, or lack thereof, relegated him to being the last person chosen for any team.

David Blaze’s Epic Kids is a fast-paced and action-packed novel that blends the best of middle school fiction with just enough science fiction and epic fantasy to make readers sit up and take notice that a new and monumentally good preteen series has just hit the shelves. Blaze’s characters run the gamut from villain to hero in truly epic fashion and each of them is well-defined and credible. The author's plot is clever and engaging and gets the angst that Jake feels as being a very middle-of-the-road middle-schooler. While this story is geared toward kids and preteens, those readers who are young at heart will most likely enjoy Epic Kids as much as I did. I’m looking forward to the sequel. Epic Kids is most highly recommended.

“I wasn’t sure what to do when the cool new kids at school asked me to sit at their lunch table. I had just set my tray down at my usual spot, you know, the not-so-cool table where one kid is always picking his nose and another is wiping greasy pizza hands all over his shirt.” In Epic Kids by David Blaze, it’s a weird day for the average 6th grader Jake as Amanda invites him to sit with her and her friends, Daryl and Tony. The boys clearly aren’t welcoming, especially the big and tall Daryl. What Jake doesn’t realize is that his life is going to get even weirder - a jaguar behind the school gym, an angry spider monkey that loves apple, and a T-Rex that comes to life.

The fast-paced plot with an excellent twist of David Blaze’s Epic Kids excellently complements the quirky fantastical nature of the premise. The cleverly funny chapter titles are as engaging as the clear-cut narrative itself. The characterization is solid; Jake is easily a rootable character who has to deal with school like any average kid until he discovers the truth about the ‘cool kids’, especially himself. This imaginative sci-fi tale is off to a great start as the epilogue promises more adrenaline-pumping action in the sequel. There’s also a number of funny ‘epic advice’ moments by Blaze at the end that young readers will love. All in all, this is a truly enjoyable read packed with positive themes such as bravery and familial bonds.

Epic Kids by David Blaze is a science fiction adventure with heartfelt family moments and action-packed scenes. An invite to sit with the cool kids at lunch is just the beginning of the weird turn of events that Jake’s life takes. He meets a mysterious new girl and feels a strange connection to her that he can’t explain. Jake skips school, which isn’t like him, but this is his chance to be one of the cool kids and gives him a chance to discover Amanda’s surprising secret. This is when things start to get weird. He discovers an evil prince is after Amanda and uncovers a shocking family secret that changes everything. As the danger grows so does the threat against those Jake cares about, which pushes Jake to fight against an evil enemy to save the planet. He has a chance to be one of the cool kids, but he’ll have to break a few rules which put him at a crossroads where one decision will change everything for him.

David Blaze delivers a brilliant adventure that children will love as they form an immediate connection to Jake and will enjoy the action, humor, and science fiction elements. The instant connection he has to Amanda plays a role in this decision and what draws him into a dangerous battle against an evil prince. He finds the cool kids are cooler than he thought when he discovers they have unusual abilities and an important duty to protect Amanda. The story has fun science fiction elements woven into Jake’s heroic journey, full of unexpected twists that build up with suspense, humor, and action that lead him and his new friends to an epic conclusion. Epic Kids is a delightful read for children and parents alike with a light-hearted story that packs action and humor into one boy’s journey to becoming a hero.