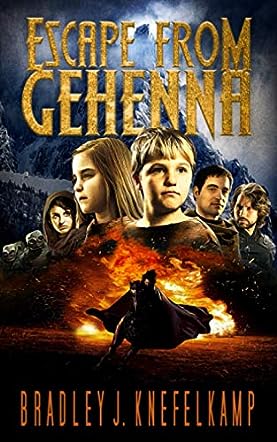 Escape from Gehenna by Bradley J. Knefelkamp is a unique Christian fantasy novel that follows Chanse and his twin sister Chelly, who work as slaves in the mines of Tartarus, Gehenna. When they were six, the Batrauks, some repulsive creatures, came and took them away from their home. In the mines, Chanse, Chelly, and thousands of other children are forced to dig ore for iron weapons. One day, while digging in the mines, Chanse discovers a cave that would turn out to be their exit from the mines and their only chance to free themselves from Dymorius, the tyrant. Now Chanse and Chelly try to escape from Gehenna, but Dymorius and the Batrauks are behind them, hunting them down. However, while running for their lives without an exact direction at first, they discover that a greater mission, bigger than both of them, lies ahead.

Fraught with suspense, captivating scenes, danger, and enjoyable characters ​in which readers of all ages will find pleasure, Escape from Gehenna by Bradley J. Knefelkamp is the first installment in a series chronicling events in an age between myth and legend. It's brilliant. I loved that it's written deftly and with great charm. I found it moving, well-plotted, and pleasurable. This is a well-crafted story with an underlying message about the power of constantly fighting for your life, even if it's a terrible one. Bradley J. Knefelkamp's clever use of descriptive language and character development, coupled with difficult challenges such as escaping enslavement, not losing one's identity, and not giving up searching for a better place to live, make Escape from Gehenna a must-read.