To Be or Knot To Be 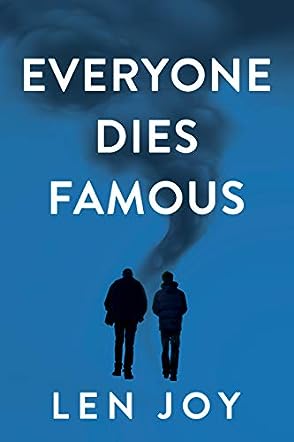 Len Joy had an idyllic childhood, growing up in the gem of the Finger Lakes, Canandaigua, NY. His interests growing up involved sports. He went off to college with dreams of becoming a football hero and world famous novelist.

Didn’t happen. He switched his major from English to Finance, quit the football team, but married one of the cheerleaders – Suzanne Sawada.

They moved to Chicago where Suzanne became a corporate lawyer and Len, with his MBA and CPA, became the auditing manager for U. S. Gypsum. Despite the thrill of auditing gypsum plants, Len wanted a different challenge.

He bought a manufacturing company in Arizona and commuted to Phoenix. Despite the travel, he managed to have three kids. While flying, he read hundreds of novels, which renewed his dream of becoming a world famous author.

In 2004 he wound down his business and started taking writing courses and participating in triathlons.

His first novel, AMERICAN PAST TIME was praised by KIRKUS as a “darkly nostalgic study of an American family through good times and bad, engagingly set against major events from the ‘50s to the ‘70s as issues of race simmer in the background…expertly written and well-crafted.”

His second novel, BETTER DAYS was described by FOREWORD Reviews as “a bighearted, wry, and tender novel that focuses on love and loyalty.” KIRKUS called it “a character-rich skillfully plotted Midwestern drama.”

Today, Len is a nationally ranked triathlete and competes internationally representing the United States as part of TEAM USA.

Everyone Dies Famous by Len Joy is a work of literary fiction. It is July 2003, Maple Springs in Missouri. All around them, storms and tornadoes batter America and now one is aimed straight at their little town. Dancer Stonemason is a stubborn old fool. He lost his son, Clayton, in a car accident and his house has been sold. Forced to move in with his other son, Jim, he needs to clear the jukeboxes he and Clayton restored. Getting together with Wayne, a soldier separated from his wife, he delivers the jukeboxes to Ted Landis. A month-long drought is about to break in spectacular fashion and, as the storm approaches, Dancer decides that old scores need to be settled and Wayne discovers his wife’s affair – the only thing on his mind is revenge. As the storm barrels through the town, destroying everything in its wake, only one of them will survive.

Everyone Dies Famous by Len Joy was a riveting tale. Written in a kind of diary format, like a real-life story, it starts off after the storm and then goes back in time. A story written from the heart, it follows the lives of some very ordinary people, the way they live, their life choices, the way they die and, in places, it really does tug at the heartstrings. There are several stories here, different people whose lives are bound together in one way or another, and they all converge at one terrifying point in life. The characters were really well written, very different people, unlikely friends and allies, and although their lives are nothing short of normal, it doesn’t take long until you become invested in those lives, taking sides and hoping for the best in the worst circumstances. There’s plenty of action but it isn’t written like a thriller, more a peek at daily life, and it is enthralling reading. I really like Len Joy’s work and I would recommend this book to anyone who wants to escape from their own world for a bit.