A Matter of Semantics 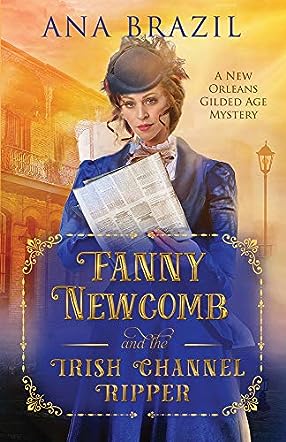 Ana Brazil lived in the south for many years. She explored the historic houses and landscapes of Virginia as a teenager, earned her master's degree in American history from Florida State University, and traveled her way through Mississippi as an architectural historian.

Her historical mystery FANNY NEWCOMB & THE IRISH CHANNEL RIPPER is her love letter to the intrepid women of 1889 New Orleans, and the winner of the Independent Book Publishers Association 2018 Benjamin Franklin Award GOLD for Historical Fiction

Just put a word like “Ripper” into the title of a mystery book, and you’re bound to attract interest from Jack the Ripper fans. But Fanny Newcomb and the Irish Channel Ripper by Ana Brazil is not about that dreaded murderer. Nor is it set in the darkened alleyways of old England. No, this historical fiction is set in the Irish Channel section of New Orleans in the late 1800s. As you join Fanny Newcomb and her unlikely fellow sleuths, Dr. Olive Giddings and her sister, Sylvia, in solving the heinous death of a young woman at the hands of this other Ripper, you will find yourself not only enjoying the challenge but also learning a great deal about the attitudes of men toward women way back then. Moreover, if you’re a modern day woman who is big on equality issues, don’t be surprised if you come away just a bit incensed at the narrow-minded male thinking you’ll encounter. But that will make you admire Fanny and her intelligent, resourceful team even more as they do what the men couldn’t do: identify the killer! After the police arrest Karl, whom the ladies are positive is not the Ripper, and the bloodthirsty mob is ready to string him up, Fanny, a prominent lawyer’s daughter, is so relentless in her attempt to save Karl from the gallows that the more she digs, the deeper she puts herself in danger. Her list of suspects is short, and the reader, like Fanny, has plenty of reasons to suspect any one of them. And that’s half the fun of reading this novel: will the one you picked out early in the story be the right one?

Ana Brazil has gone to a great deal of trouble to research her information on the life and times in late 1800s New Orleans, rife with prostitution, poverty, religious and cultural conflicts. She has supplied an extensive bibliography, and that accounts for the very authentic settings and attitudes in this story. Further, in a rather personal approach in the Afterword, Brazil supplies facts on which her historical fiction is based, along with giving the reader insight into how the characters of Fanny, Olive and Sylvia were created. This section is as interesting as the story itself. Fanny Newcomb and the Irish Channel Ripper is an excellent first novel, and going by the ending paragraph, one suspects Ana Brazil is possibly planning a sequel. I can actually see this developing into a TV series like the award-winning Canadian series, The Murdoch Mysteries. Has Ana Brazil set the stage for a similar series with this book? Only time will tell.