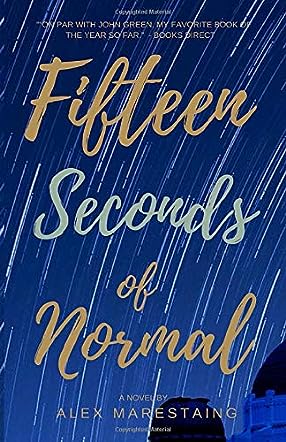 Latino author Alex Marestaing has worked on creative projects for companies such as The Walt Disney Company, Thomas Nelson (Harper Collins), Lego, The Los Angeles Times, and Sports Spectrum Magazine. As a first generation American, Alex has used his writing to empower minorities and shed light on mental health issues such as Tourette’s and Agoraphobia. His critically acclaimed indie novel I’m Nobody, about an agoraphobic teen, was an EPIC Award finalist and won an honorable mention at the London Book Festival. His latest novel, Fifteen Seconds of Normal, deals with the difficulty of finding normal in a world that often looks down on those who are different. One of the novel's protagonists, Kaeya, struggles with Tourette Syndrome, a disorder that is widely misunderstood. Kaeya stands as a symbol of solidarity to those who feel different and are often underrepresented in literature.

Kaeya moved to a new school with the hopes of being treated like a “normal” teenager by her peers. It’s hard to hide her Tourette’s, but she manages and even draws the attention of the boy she’s crushing on. Unfortunately, that boy’s not Thatcher, who is already half in love with her! The drama starts on school photo day, when Thatcher, totally oblivious to what day it is, comes to school after the worst morning of his life, looking an absolute mess. Needless to say, his picture is horrendous and he immediately throws it away, only for someone else to fish it out and create a humiliating meme that quickly goes viral. One thing leads to another and Thatcher ends up being suspended for fighting. It’s in suspension that he gets to know the real Kaeya, who retreats there when her Tourette’s gets too much to handle. However, despite budding feelings for Thatcher, Kaeya’s still set on going to the school dance with her crush and getting her fifteen seconds of normal. Alex Marestaing weaves a beautiful, heartwarming coming-of-age in Fifteen Seconds of Normal.

With complex, relatable and likeable characters, Fifteen Seconds of Normal is a brilliant read for Young Adults and grown-ups alike. In this day and age, cyber-bullying is something everyone is aware of, even if they haven’t experienced it firsthand, and Alex Marestaing has a way of putting you into Thatcher’s shoes so that it really felt like you were going through it with him. The same goes for Kaeya with her Tourette’s. Both main characters were so lovely that it was a genuine pleasure to read about them, and I loved how they developed over time and figured out what was really important to them. Also, although it's a teenage story set in high school, the angst is kept to a minimum, which I appreciated because it doesn't detract from the main plot. The layout was also a big plus for this novel; as it flitted between Thatcher's and Kaeya's perspectives, the paragraphs were short and to the point, which meant I kept saying to myself, "Just one more section!", resulting in my finishing it in a day! It's a wonderful story focusing on friendship, love, and accepting who you really are. I guarantee Fifteen Seconds of Normal is a story you will want to go back to again and again.