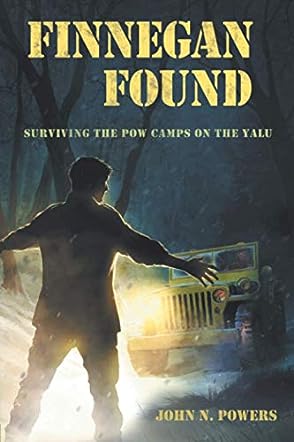 The Korean War (1950-1953) has been called the “Forgotten War”. Tucked away between the sweeping victories of WWII and the debacle of Vietnam, details of this first armed conflict of the “Cold War” have been swept under the rug. So too have the sordid details of the experiences of the prisoners of war of this conflict. In John Powers’ Finnegan Found, we follow a young farm boy from Minnesota who enlisted in the Army to earn money for college and found himself in deadly combat in Korea. We watch “Swede”, the nickname he was dubbed with in basic training, evolve into a natural-born leader. The US Army was ill-prepared to fight the invading North Koreans and death and capture were rampant among their ranks. Swede’s capture sets up a three-year saga of forced marches in subfreezing weather, solitary confinement, starvation, and brutal punishment. His story of resistance, survival, despair, resignation, and altruism is told in accurate and astonishing detail. Through Swede’s eyes, we see many men in the same circumstance and their will to survive. The characters come alive as you cheer them on and weep at their suffering. The treatment of prisoners of war, American and British primarily, during the Korean War rivaled the viciousness of the Japanese during World War II. The North Koreans and Chinese did not abide by the Geneva Convention. More than seven thousand one hundred Americans were captured and imprisoned and just over two thousand seven hundred are known to have died while imprisoned. With Swede’s story at the core, this book is a riveting journey of heroism and despair, defeat, and victory that will keep you on the edge of your seat to the last page.

John Powers' excellent writing, depth of detail, riveting characters, and attention to historical facts make Finnegan Found a successful attainment of his mission. To quote Powers, “The general public is almost completely unaware there were ever Americans held as prisoners-of-war in Korea. That knowledge is not forgotten – we never bothered to learn it in the first place. This book is my attempt to shine a light on their experience and bring to those men the recognition they deserve.” My reaction to the story was probably more “gut felt” than most people because I trained under career Army survivors of the Korean War. John Powers’ skilled storytelling will bring it to anyone who reads this work. He reveals what we now call “brainwashing” and how those farm boys dealt with the attempts to twist their minds. He also reveals how badly the American government treated them upon their release from captivity. Shocking.
It’s past time to join Powers in honoring these men and the sacrifices and suffering they endured. Call it entertainment, call it history but reading John Powers’ Finnegan Found is a must. By the time a ceasefire was proclaimed in 1953, over five million soldiers and civilians had died. To this day, a formal peace treaty has not been signed. This is a fine treatment of little-known history. I hope we see more from this author.