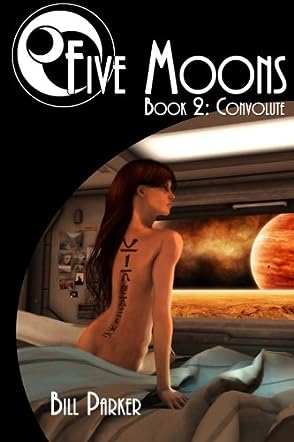 The Five Moons is an army surplus ship captained by one Dallas Blake and manned by an unlikely band of men, women, children and androids who have become more of an extended family than a space-faring crew. In Convolute, the second book in the series, author Bill Parker gets straight into the action, opening in the middle of a manhunt where eventually the victim falls bleeding onto Dallas Blake’s bar table, thus ruining his sandwich. The action continues at a lively pace with Blake and his crew enlisted by the interplanetary forces of law and order to assist with a mission to rid a planet of some rather nasty criminals. This is quickly followed by a visit from a family of settlers from a remote planet who present a plea for help to rid them of a group of mercenaries who have taken over their small agricultural world.

The crew of the Five Moons may be an odd one, but they work well together under the light-handed command of their captain. Using their individual highly developed skills, along with a good deal of hi-spec military equipment, the mission is quickly brought to a very satisfactory conclusion for all concerned. One thing is puzzling Dallas Blake, however ... well, actually, quite a lot of things are puzzling him, but some stand out. Why is his ship bigger on the inside than it is on the outside? Why do cargo holds appear where there were none before? The answers appear to be buried in the ship’s alien memory banks, but can he interpret the information?

Five Moons: Convolute is the sort of book that science fiction fans long for - a good, fast-moving plot, evil villains, faster than light inter-dimensional space travel, lots of gadgets, machines, sleek spaceships bristling with weaponry, and all liberally sprinkled with exotic ladies, some of whom are divinely evil. I thoroughly enjoyed the book and took to Dallas Blake, a character who seems to have elements of Han Solo, John Walton (if you can remember the TV series) and Pa Larkin (The Darling Buds of May). Bill Parker has created a science fiction classic - long may the series continue.