For A Few Dollars Less 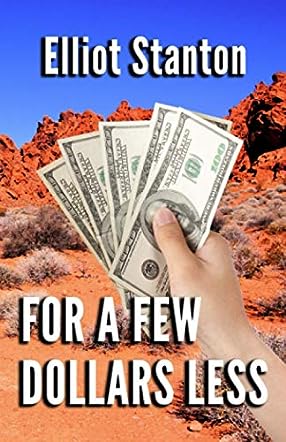 For A Few Dollars Less by Elliot Stanton is your archetypal lad’s week away in Las Vegas for a group of seven, predominately middle-aged, British friends who want to send one of their company off into marriage in style. Sean Savage is the youngest of the group and is about to marry again. Sean’s friends - Eddie, Donnie, Kraz, Brian and Max - decide that a trip to Las Vegas is just the ticket to celebrate their pal’s upcoming nuptials. Stan, older than the rest and not really a friend, somehow manages to inveigle himself into the group and so the seven friends head for the holiday of a lifetime, an opportunity to experience something new and different in the supercharged and luxury atmosphere of Las Vegas. The group’s problems begin even as they arrive at the airport and board their flight for Las Vegas. Brian, the perennial drunk of the group, has already gotten himself well under the weather and the boys have to do their best to keep him inconspicuous so that they will be allowed to fly. Las Vegas presents this group of “likely lads” with excitement, intrigue, and no shortage of trouble. Will they survive their week of fun and games and make it back to Blighty safe and sound?

For A Few Dollars Less is a genuinely humorous and satisfying read, especially if you are British or of British extraction, as I am, and can truly appreciate the clever, dark wit and equally blatant sarcasm in some of the interactions between the lads. Author Elliot Stanton has drawn a perfect group of characters from modern-day British life; we have Kraz, the Eastern European immigrant, whose background may not be as obvious as his friends initially thought; Brian, the absolute drunken sot with the heart of gold and real doubts about his lifestyle but a happy-go-lucky attitude to overcome any doubts; Max, the son of a disgraced lord, who is wealthier and more refined than the rest and yet still desperately desires to be just “one of the lads”; Steady Eddy, who narrates this tale in the first-person; and then there is Stan, the curmudgeonly old whinger who finds fault with everything and always has on hand his plethora of pills for one ailment or another.

The author’s comparison of Stan to Victor Mulgrew did not go unnoticed. All of the characters contributed mightily to this ensemble cast, which made the story even more enthralling. As I was reading, I couldn’t help but think back to the ensemble cast of that iconic 80’s British TV show, “Auf Wiedersehen, Pet,” and wonder if the author had drawn some inspiration for these characters from there. He alluded a couple of times to the preconception of the “Englishman abroad” and although English was supposedly a common language in Las Vegas, the whole idea of how English people travel was encapsulated beautifully in this tale. I thoroughly enjoyed the book and can definitely recommend it to anyone who wants a fun but gentle adventure.