Checking Our P.U.L.S.E. for Kids 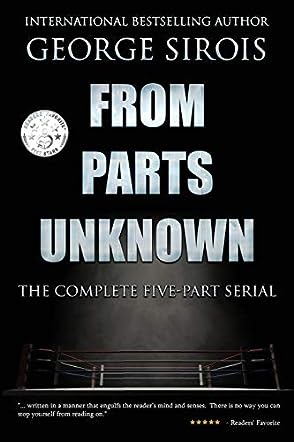 George Sirois is the author of the international bestselling novel Excelsior and its two sequels. He served as President of the Missouri Writers Guild from 2017-2018, and is the host and producer of the podcast Excelsior Journeys, part of the Winding Trails Media Podcasting Network. He is also an audiobook narrator, lending his voice to books of all genres. A New Yorker since birth, George now lives in St. Louis, Missouri with his wife and daughter. For more information, please visit www.hesgotit.com.

From Parts Unknown: The Complete Five-Part Serial by George Sirois welcomes you to the world of wrestling. We all think that we know what happens behind those rings and away from the audience’s eyes, but that is never the case. In this novel, we get to see the future of sports and entertainment. This is the complete collection of From Parts Unknown series, which is great for me because I hate anticipating a next book release.

The series is about Stephen Barker, a man who is out of all options. After losing his job and insurance, the only way he can support his family is by joining the Gladiatorial Combat League. However, he has no idea that the once clean-cut sport is now becoming a corrupt center for lust for money and bloody gore. The current champion is Kyle Flyte and he is not happy with the direction GCL has taken. Under the rule of the booker Vornakai, things are heating up and not in a good way. Vornakai has some notorious plans and all he needs is a test subject, a man desperate enough to go along with his plans and it looks like Stephen may be what he needs to make his evil plans a reality.

Let me tell you that this series is very intense. Because of the subject matter, the storyline can easily become something like a hit TV series. It is written in a manner that engulfs the reader’s mind and senses. There is no way you can stop yourself from reading on. I’m so grateful that I got my hands on the complete series set because otherwise I would have died from waiting. The anticipation is amazing; the setting is really good and very real. All in all, this is a complete package, literally. Very entertaining and thrilling.