Life on a Mountain The Thief of Roseland 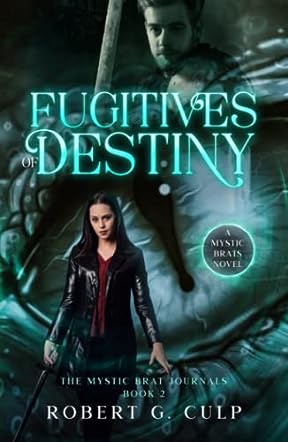 Fugitives of Destiny: A Mystic Brats Novel is the second book in The Mystic Brat Journals series by Robert G. Culp. The story and struggles of Jason, Nara, and Julie continue as the three teens face yet another hurdle. The three of them are taken to another reality of Aria so that they can stay safe. While hopping into another reality keeps them safe from the people who want them dead, it does not mean they are safe here. Visions of Osiris destroying the Earth plague Jason, and he has no idea how he can stop them. To make matters worse, Nara and Julie have switched bodies, and now they have to tackle each other’s issues on top of everything else. None of them has it easy and they have to rely on each other to get past this troubling time. However, it seems like rest is not on the cards for them as a new enemy is after them, and they have no option but to face it. What will they do? Can the trio stay focused and protect each other or is it too late for that?

Although I didn’t read the previous novel in the series, I had zero issues with forming a connection with all of them and getting invested in Fugitives of Destiny. Jason, Nara, and Julie are all powerful characters with their own storylines. Robert G. Culp does justice to each of them and does not let one storyline overshadow the others. The descriptions are incredibly rich and vivid. Each character is smartly developed, and it shows in their growth. Out of all of them, Nara’s character is my favorite. She is smart, she handles Julie’s life like a pro and encourages both of the other protagonists. Jason’s progress feels more intense as he has the biggest burden to bear. The pace is perfect for the story. It is fast yet not so much to give readers whiplash. The plot is intense, and that is exactly what I expect from a young adult fantasy with strong protagonists.